The term “crowdsourcing” has been around for nearly a decade, originally coined in 2006 by Wired writer Jeff Howe. He defined it as the act of taking a job traditionally performed by a designated agent (usually an employee) and outsourcing it to an undefined, generally large group of people. In other words, businesses tap into the “power of the crowd” rather than carrying out tasks themselves.

Crowdsourcing is frequently found in conversation alongside its partner in crime – crowdfunding. Often used interchangeably, these terms do have different meanings. While crowdsourcing represents the specific tool or talent you need to accomplish a task, crowdfunding is the capital required to accomplish it. Think of crowdfunding sites like Kickstarter and Indiegogo, for example. These are places where people can share their ideas with potential donors and raise money to bring those ideas to life. But crowdsourcing is where the actual project gets done.

How Brands Are Getting Involved

Companies have caught on to the attention surrounding crowdsourcing, and have sought out innovative ways to get their valued customers involved in production and promotion processes. Crowdsourcing brings people together online, so there aren’t any geographical constraints to get in the way. This allows brands access to untapped talent that might not be located in their area. Crowdsourcing generally occurs through social media, so businesses can gain insight into what consumers are talking about, interested in, and where their talents lie.

From asking followers their preference on a design or color scheme, all the way to submitting their own content, companies large and small have realized the benefits of using their most valuable asset (their customers) to test new ideas. Asking what people like before putting something on the market helps reduce the risk of a product or service falling flat, while also generating hype around a new offering.

As consumers, we like to know that a company is listening. It’s important to know that our voices are heard when we have ideas or feedback to share, especially when it involves spending our hard-earned money. Asking for our input helps create a personal connection, which in turn leads to greater brand loyalty.

Over the last decade, brands have found new and interesting ways to get their audiences involved through crowdsourcing. Here are four of the best from the past couple of years.

Doritos is arguably one of the first companies to take advantage of crowdsourcing for an advertising initiative. They were one of the first – and today, still one of the best. For the past nine years, they’ve used consumer-created ads for one of their 30-second Super Bowl spots, and the upcoming Super Bowl in February will be their 10th and final one.

The “Crash the Super Bowl” contest has continuously grown in popularity, receiving over 32,000 submissions to date. Over the years Doritos has given out $7 million in prize money, while also serving as a platform for creatives to get their names out there in the advertising and video production communities. These ads have become iconic for the brand, positioning them as a comedic mainstay among the most reputable Super Bowl advertisers.

For their final contest, Doritos will give away $1 million and the opportunity to work with esteemed director Zach Snyder, best known for movies like 300 and Man of Steel. The winner will get to take part in a currently hush-hush project for Warner Brothers and DC Comics, so you can imagine the expectations that the winning submission will have to meet. Videos will be reviewed by a judging panel that includes Frito-Lay executives, and the top three finalists were recently announced.

Doritos has aired such memorable commercials over the past decade that it’s hard to believe they were submitted by seemingly average consumers! Giving marketers and creators the opportunity to show off their skills not only sheds light on the amount of undiscovered talent out there, but it makes Doritos an approachable, relatable brand.

One of my favorites comes from the 2011 Crash the Super Bowl winner, proving that you should never tease a hungry pug with Doritos chips.

Starbucks is the perfect example of a crowdsourcing opportunity that arose from an unlikely place. Baristas started noticing that Starbucks’ signature white cups were serving as blank canvases for designers and artists to doodle on, so they got the idea to start a campaign around these simple designs. And in the spring of 2014, the White Cup Contest was born.

Customers were encouraged to decorate their Starbucks cup with an original design, take a photo, and submit it on social media with the hashtag #WhiteCupContest. Over the course of a few months, over 4,000 unique submissions were received. The winning design was submitted by Pittsburgh art student Brita Lynn Thompson, and her image was then used on the limited edition reusable cup for 2014. 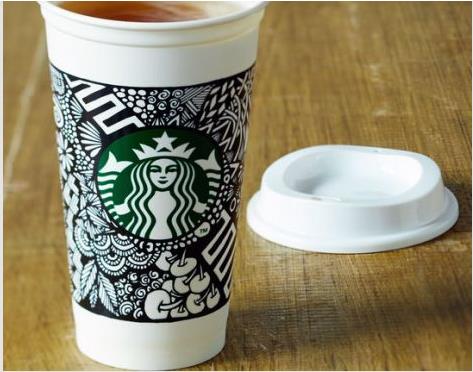 Each year, Starbucks releases a new design for these reusable plastic cups, which you can purchase for $1 and use about 30 times. As an incentive to reduce waste, you receive a 10 cent discount each time you use one. So in essence, Starbucks is paying you to use a more sustainable product. This is all a part of the company’s continued efforts to encourage customers to go green and prioritize environmentally-friendly products, and it was a great way to shed light on the talent of a young artist.

Lay’s “Do Us A Flavor” contest is another one of Frito-Lay’s crowdsourcing initiatives, which recently wrapped up its third year. However they went in a completely different direction than Doritos, which has helped diversify the offerings under the conglomerate’s umbrella. But like Doritos, they too have done crowdsourcing right.

Do Us A Flavor asks customers to submit their ideas for the next potato chip flavor, and this year’s topic was local foods. Every city in America has its staple food item (the Philly cheesesteak, Buffalo’s chicken wings, Chicago’s deep dish pizza, etc.), and Lay’s wanted to shed light on these long-standing traditions, while also giving participants the opportunity to share their pride for their hometown.

After narrowing down the submissions to four finalists, the unique flavors were sold in retail stores across the country to give consumers an opportunity to try them all. Then, a vote was held on Lay’s website to crown the winner. This year’s Do Us A Flavor winner was Southern Biscuits and Gravy, and the other three finalists were Kettle Cooked Greektown Gyro, Wavy West Coast Truffle Fries, and New York Reuben. The winner will receive $1 million or 1% of the flavor’s net sales over the next year, whichever amount is higher. 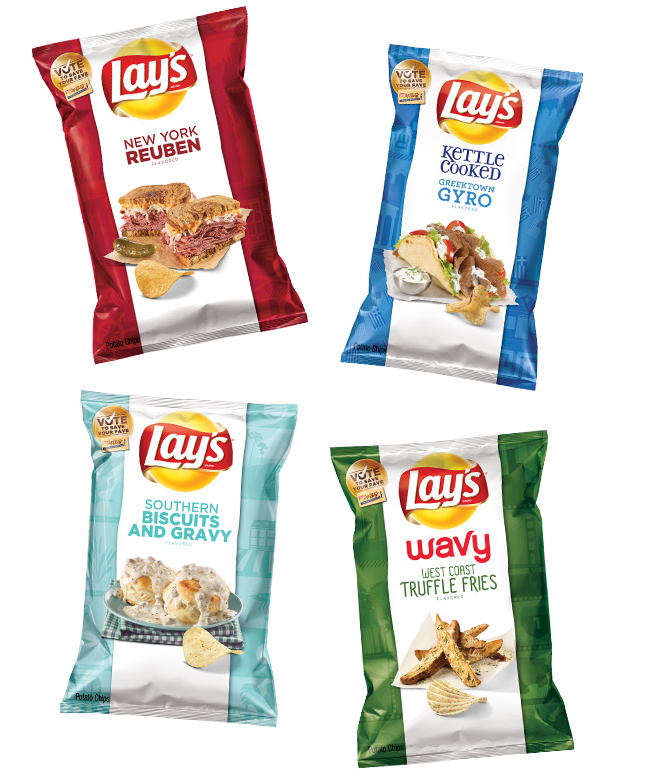 This example of crowdsourcing helps ensure that Lay’s is providing their customers with the options they want. And what better way to find out than by asking them to submit their ideas for the next new flavor? There’s also an appeal to selling more obscure concoctions. It catches a consumer’s eye when they’re walking down the snack aisle, and for such a low price, you can try something new. It’s all about giving customers what they want, while also being open to new ideas.

Lay’s continues to adapt their products to the market’s changing demands, whether it’s offering baked options for the more health conscious, wavy chips to accommodate a complementary dip, or crazy flavors like cappuccino (a former contest finalist) to keep people guessing. And it gets people coming back time and time again.

Airbnb’s marketing strategy has always been focused on vivid, high-quality imagery to give consumers insight into different travel destinations and accommodations. However, with all of the locations around the world that they service (over 34,000, to be exact), they needed help gathering images of each place. That’s where crowdsourcing came in.

In 2013, Airbnb launched its first video crowdsourcing campaign on Vine. Through a series of user-submitted videos, they combined them together to make a short film called “Hollywood & Vines.” The premise of the film was travel and adventure around the world, and ultimately 100 of these 6-second clips were selected for the nearly four and half minute video. This campaign was developed in conjunction with Airbnb’s 2013 sponsorship at the Sundance Film Festival.

In 2014, they took a slightly different approach to their campaign, utilizing Instagram to collect video contributions. Using the hashtag #AirbnbShorts, users submitted 15-second videos that summarized why travelers would want to visit their city. This was an attempt to shed light on potentially lesser-known locations, while also giving that local vibe. The winner of the contest, Scott Allen Perry, received a complimentary flight to London, a week’s stay at an Airbnb property, and a ticket to the Sundance Film Festival. His video gave viewers a sneak peek into all that New Orleans has to offer – take a look!

Okay, world. Here’s my video love letter that I hope will inspire people to visit New Orleans. Pass it on. Stars me, @elviserator and @baileydomke #AirbnbShorts #neworleans

These two campaigns closely tie in to Airbnb’s purpose and goals, which are to encourage people to explore places they’ve never been before, and to do so at an affordable price. By allowing customers to share stories about their favorite city, people can get a more personalized, inside look at cities all around the world and decide where their next adventure will be. It also draws a parallel to what crowdsourcing is all about. Airbnb’s premise is user-provided housing and crowdsourcing is all about user-provided ideas, so this couldn’t have been a better match for their marketing strategy.

While some companies are still figuring out how to utilize crowdsourcing effectively, many others have already taken advantage of this tactic. If you’re looking for ways to connect with your customers on a more personal level, get their feedback on an idea, or show your creative side, crowdsourcing might be an effective strategy for you. And you don’t have to be a huge international brand like those mentioned to get involved. Simply taking the time to survey customers on a new product or service offering, hold a contest, or get feedback from thought leaders in your industry are all effective and inexpensive ways to help you make the smartest decisions for your business.

These are only four great examples of companies that have put the power of the crowd to work for them; do you have any other favorites? Leave them in the comments!

Editor’s Note: This post was originally published on August 22, 2012 and has been updated to provide you with the most relevant examples for 2016.