Storytelling has been a common human activity for eons: societies of centuries past crafted elaborate, intricate creation myths; individuals listened to the epic poems of Gilgamesh and The Odyssey; and children both then and now marvel over the fables and fairy tales of writers like Hans Christian Andersen and Jacob and Wilhelm Grimm. Stories unite us, captivate us, and encourage us to start talking and contemplating: they have, and they always will. The only thing that has shifted with time is the primary means through which we communicate fiction and nonfiction alike: the oral tradition was once the primary means of passing along information; storytellers then took pen to paper (succeeded by typewriter, then by computer).

I’m a big fan of brands that prioritize storytelling and integrate it into marketing and advertising efforts. Why? Telling stories is an inherently human activity: people tell stories, and they’re often passed down from generation to generation. Thus, when brands tell stories, they reveal their human side: a brand story articulates the values and guiding principles of said brand. (Coca-Cola terms its guiding principles its “north star.”) Thus, a brand with a story isn’t just a purveyor of products or a seller of services that prioritizes financial gain above all else. A brand with a story is a business comprised of people with goals and aspirations: individuals whose chief aim isn’t solely to make money or push products but rather individuals who want to offer consumers something distinctive, something better than what’s already out there. The point is that a story can articulate things mere products cannot: a brand’s larger purpose, its history, its chief aims, etc. It’s the foundation that becomes an integral part of a brand’s identity.

Consider the 1984 Apple commercial, long heralded as a classic and brilliant example of brand storytelling.

This archetypal good vs. evil storyline positions Apple as a kind of rescuer that will save people from the abysmal, dismal, dystopian, and Orwellian society and all-powerful Big Brother figure. In less than a minute, Apple manages to articulate its mission: wrest control from the few, transfer it to the many and replace conformity and the “herd mentality” with originality. In less than a minute, Apple tells an unforgettable story.

Apple is an example of the extent to which a well-told narrative can benefit a brand, but there’s another reason why I’m such a brand storytelling aficionado: stories appeal to our emotions. They’re alluring, sometimes entertaining, sometimes sentimental. And their power isn’t limited to capturing consumers’ attention. Stories have what Fast Company refers to as “primal power,” because they affect us physiologically and emotionally.

Fast Company refers to two studies that revealed the ability of stories to impact our brains. In one study, researchers discovered that different brain regions track different aspects of a story; some of these regions mirror those involved when people are involved in similar activities in their own lives. Stories create a “bonding empathy” that prompts people to identify with a story’s protagonist as if they were that character; readers understand a story by “simulating” events from the story, hence, the ability of an enthralling narrative to draw us into the story line.

Neuroeconomics researcher Paul Zak also talks about the power of storytelling. Zak conducted an experiment in which he had participants listen to a story about a young boy with cancer named Ben and the sadness and anxiety Ben’s father feels. He found that when people heard the story, their brains produced two chemicals: cortisol (which is associated with distress) and oxytocin (associated with care and empathy). The areas of the brain rich in oxytocin receptors were the most active.

How did this effect people? Zak gave individuals the chance to share money with people in the lab, and those who produced both cortisol and oxytocin were more likely to donate money more generously to strangers in the lab. People were paid $20 to be in the experiment, and they gave away on average half their earnings.

Now, when it comes to brand storytelling, the important thing is that narratives change our behavior by changing our brain chemistry. By way of chemicals in the brain, stories can actually prompt people to take certain actions. And what’s equally as interesting is the fact that in Zak’s experiment, when people watched a boring, uneventful video of a boy named Ben and his father at the zoo, they blanked out. They didn’t pay attention, because there was no reason for them to pay attention: nothing exciting or interesting happened.

I think what brands can learn from research on storytelling is this: crafting a message in the form of a story is arguably one of the most effective methods by which to reach people. And unless brands deliver a message in a way that is enticing, their efforts will be all for naught, because individuals will simply zone out, and the message will be lost. I know I’m not alone in tuning out a dull, lackluster commercial on TV or an ad on Hulu.

Clearly, stories draw us in, they blur the lines between fantasy and reality, and they appeal to us on an emotional level. And one of the defining features of the world we live in is its hyper connectivity. Social circles, peers, and brands are as accessible as they’ve ever been. With all of this individual to individual and individual to brand interaction, it’s easier than ever to make a story available to the masses. And why wouldn’t brands want to forge deeper, emotional connections with consumers?

Last year, Coca-Cola published a two-part video entitled Content 2020, in which it describes how it plans to harness the power of the social media landscape and create content that adds value to people’s lives. Its main strategy: storytelling, specifically dynamic storytelling. Coca-Cola states that because storytelling is at the heart of all communities, families, and cultures, we live in a “connections ecosystem” in which “every contact with a point a customer should tell an emotional story.” Through brand stories, Coca-Cola wants to create content so compelling that is becomes “liquid: i.e. moves freely throughout the connected digital spaces that we access every day, propelled by ordinary individuals. It hopes that these liquid ideas will in turn spark conversations.

While watching Coke’s Content 2020 videos, I realized that brand storytelling is even more relevant in our contemporary society, which facilitates the rapid and widespread dissemination of content. (I couldn’t help but think of the phenomenon of virality while watching Coke’s videos on YouTube.) Interesting, original subject matter sparks sharing (92% of people retweet something because it’s interesting content). People don’t just talk about the commercial they saw amongst their families, friends, and coworkers, in their homes and offices. They talk about it publicly in social media forums like Facebook and Twitter. The ability of a well-articulated story to capture our attention is one thing that hasn’t changed over time. And in a world saturated with information, don’t companies have to be more and more creative to stand out amidst all the other noise?

While searching for examples of brand storytelling, I came across this quote from Blake Mycoskie, the CEO of Tom’s Shoes:

“I realized the importance of having a story today is what really separates companies. People don’t just wear our shoes, they tell our story.”

Tom’s actually has its own YouTube channel entitled “One for One,” which refers to its founding principle: when someone buys a Tom’s product, Tom’s will help a person in need. The YouTube channel features stories from Tom’s individual employees and videos that spotlight the people whom Tom’s directly helps. But more than that, it firmly establishes Tom’s identity as a humanitarian business with a tremendous sense of social responsibility and devotion to the greater good.

Tom’s is one example of contemporary brand storytelling, and there is a multitude of other brands packaging products in alluring narratives. One of the most noteworthy in my opinion is Google, which weaved a fantastic yarn through this commercial.

When I first saw this commercial, I thought it was possibly one of the best advertising efforts I’d ever seen. Aside from achieving that illusive balance between moving and schmaltzy, this story is so striking because it’s actually not at all about Google. It’s really about the people who use Google and what Google can do for them. Through this effort in brand storytelling, Google portrays itself as a digital time capsule, a keeper of memories and fleeting yet significant moments. Again, the main character of this commercial isn’t the search engine, but rather Sophie Lee (and, by extension, every parent).

I think Chrysler also deserves praise for this commercial-story:

This commercial articulates the Chrysler story in an incredibly authoritative, commanding way. It establishes the company’s identity in a clear-cut way by at the same time embracing and refuting stereotypes: it’s an American company born out of (and proud of) adversity. It boasts grittiness but simultaneously a ruthless tenacity and a dogged steadfastness. The commercial begins with a series of questions but ends with a definitive command. The two-minute commercial captures the brand’s distinctly Detroit roots and markedly Motor City qualities.

If I Worked at Nike

According to author Christopher Booker, there are seven basic archetypes that make up every story ever told (these include among others overcoming the monster, rags to riches, comedy, and tragedy), but the great thing from a branding perspective is that these stories can all be told in infinite ways, with unique settings and distinctive protagonists. I decided to test my hand at crafting a brand story by using Pinterest to tell the tale of the history of Nike. Here’s what I came up with: 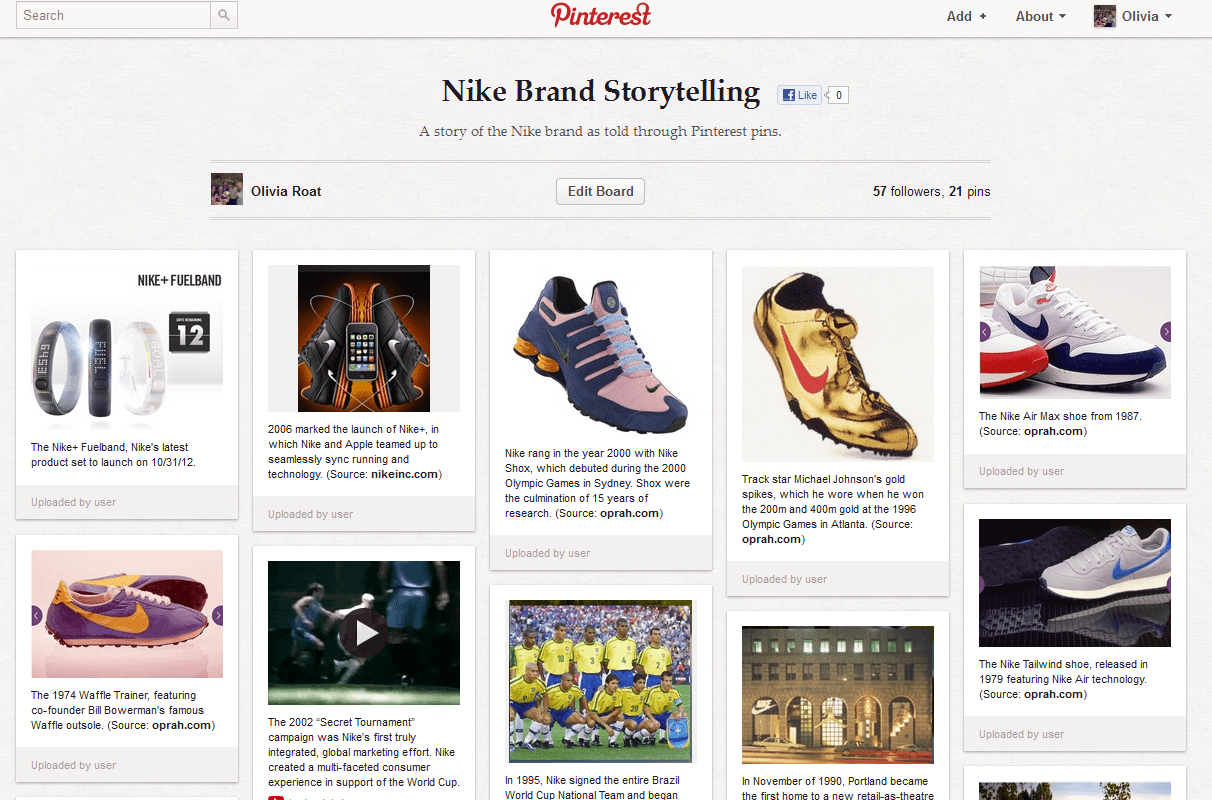 This is just a screenshot of the board, but head over to the real thing to see Nike brand storytelling a la Pinterest.