There’s this stagnant part of the season between the end of the holidays and right before spring where some may feel that there isn’t much to look forward to – this is especially true if you’re like me and live up north. The weather is cold, it snows (a lot!), and we cling to whatever simple pleasures we have. While we’re all looking for light at the end of the tunnel, a Canadian company gives us reason to charge on – while caffeinated.

For those unfamiliar, Tim Hortons is a café and bakery that has been serving Canada and parts of the Northeast and Midwest United States since 1964. Although they are a large chain with over 4,000 locations, they are still able to maintain a quaint atmosphere while offering customers a variety of coffee, donuts, and other fast-food items.

Every year since 1986, the coffee chain runs a promotion beginning in February entitled “Roll Up the Rim to Win.“ For every hot beverage a customer purchases, they have the opportunity to roll up the rim of their cup to reveal whether or not they’ve won a prize. Prizes range from a free coffee or doughnut to free cars and cash prizes.

Now, as a marketing specialist in Mainstreethost’s Enterprise department, I get a little bit of extra insight as a consumer. It’s sort of like being the “man behind the curtain” if you will. I’m able to pinpoint what certain brands do to attract me, the steps they take to turn me into a customer, and how they keep me satisfied so I keep coming back.

As soon as the February promotion starts – I am there, in a long drive-thru line with everyone else, hoping to be one of the first to lucky Roll Up the Rim winners. Typically speaking, I would consider myself a non-brand loyal coffee drinker – so whether my morning cup comes from Starbucks or from the coffee machine at the office, it doesn’t matter much to me. It’s more of a matter of convenience. However, with Roll Up the Rim to Win from Tim Hortons, I get to not only drink my morning cup of coffee, but I could also win something!

After about a week of “rolling up” both my cup rims and to the drive-thru line at Tim Hortons, I still hadn’t won anything. With 1 in 6 odds of winning, it had to be coming soon, right? Nope. Six cups, seven cups, eight cups – still nothing! However, I still marched on because at this point admitting defeat was more than my pride could handle. I keep thinking, “well, maybe tomorrow…” 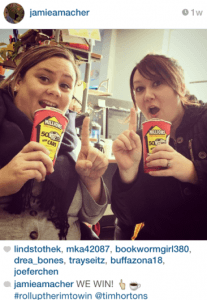 So, despite my inner turmoil dealing with these constant losses – it got me questioning “Why? Why am I doing this to myself? Why do I keep returning to something that gives me constant disappointment? WHY?” Not only that, but how can I take my own addiction for this promotional giveaway and apply it to my own clients?

The Aroma of Inspiration

In a 2011 interview with the Toronto Starr, Ron Buist, the retired former marketing director of Tim Hortons, said that he was inspired to create the Roll Up the Rim promotion during a meeting with their paper cup manufacturer. He simply asked them if it was possible to print on the blank area inside the rim of the coffee, and when they told him yes – he had his “light-bulb moment” of inspiration.

If you’ve never run a promotion or giveaway for your business, or perhaps feel like everything you’ve done in the past has grown stale, you may find yourself having a difficult time coming up with your next big idea. The one thing we can learn from Ron Buist and his moment of inspiration was that it was literally right in front of him the entire time.

The next idea for your most popular promotion (whether it be a giveaway or otherwise) may be staring you right in the face and you don’t even realize it. Stop racking your brain to the point of frustration; take a step back and breathe. The late Steve Jobs said “creativity is just connecting things,” and once you start making connections between the assets you have in front of you – the ideas will flow.

You might be thinking to yourself, “I don’t have the resources to run any type of giveaway or promotion, let alone one that’s to scale with Roll Up the Rim to Win!” That’s a valid point, and I would tell any one of my clients interested in running a promotion to stay within their means.

However, the thing to keep in mind is that Roll Up the Rim to Win didn’t start out as the all-out multimedia blitz campaign with large prizes. Quite the contrary, in fact, as the biggest prize available in 1986 was a box of Timbits (otherwise known as donut holes).

What’s important is that your customers remember that you gave them the opportunity to be rewarded for their patronage. So whether you’re offering an extra 10% off coupon, or the chance to win a Toyota Camry Hybrid XLE, the point is that you’re doing what you can to say “thank you” to your customers – and that’s what they’ll appreciate.

Despite my losing streak, one thing I really appreciate about Roll up the Rim is how easy it is to be part of. I don’t have to give up any personal information to enter, there are no forms to fill out, and finding out whether or not I’ve won takes less than thirty seconds. Unlike other fast food restaurant promotions, there’s no need for me to collect anything or keep track of game pieces. If you win, all you have to do is tear off the rim of your cup and present it the next time you go to your local Tim Hortons. It’s that simple. Can’t make it to your local Tim Hortons that day? That’s ok, too, as they’ve also developed a way that everyone can participate online as well.

When developing your own promotion, whether it’s online or in person, keep this logic in mind and leverage it to your advantage. We live in a fast-paced society where nearly everyone lives a busy lifestyle, and your customers will appreciate not having to jump through hoops to be part of your latest promotion. Keeping everything as simple as possible will streamline your promotion, and your customers will most likely flock to it if you keep it easy for them to participate.

It’s All About Timing

As a marketing specialist, it’s easy for me to assume why Tim Hortons chose to have their Roll Up the Rim to Win season begin in February. Many of their main competitors (think Starbucks) offer specialty holiday drinks during both the fall and early winter months, and hot beverages aren’t exactly everyone’s go-to drinks throughout the summer season. Tim Hortons managed to find the “sweet spot” during the year where this promotion fits into the lifestyle of their primary consumers and is the most profitable for them as a brand – and that is key.

Think of a special time during the year where you have a competitive edge in your industry, and also be sure to study what your competition is doing. Depending on what your goals are (more sales, more brand awareness, more e-mail signups, etc.), you may find that it’s not a one-size-fits-all situation. Test the waters and analyze the results, even taking a risk or two. It may be the only way to find out what works. If you have been in the industry for a while, you should have a pretty good grasp of who your customers are and their behaviors. Creating a tailor-made giveaway or promotion that fits seamlessly into their lifestyle is a great place to start.

An Army of Addicts

After about two or three days of picking up a morning Tim Hortons coffee, I soon began to realize (and remember) how great their coffee is. Not only coffee, but their tea, their lattes, their hot chocolate, and the list goes on. I mean my goodness, regardless of the giveaway, WHY had I not been getting Tim Hortons every morning on my way to work? It’s madness!

Not only does this giveaway offer a special bonus to loyal customers who would be buying a hot beverage regardless, but also provides an enticement for non-brand loyal people like me. It’s at this point that they now have the opportunity to turn me into a loyal customer by reminding me of both how great their coffee is as well as their ability to provide friendly and speedy customer service. They’ve pretty much succeeded. When you’re brainstorming ideas for your own promotion, keep this in mind: Enticing people to use your service through a promotion is your moment to show them that you are a leader in your industry; seize the opportunity and let yourself shine! Having loyal and happy customers both new and old is one of the best marketing tools at your disposal, because they can now work as advocates for your brand. 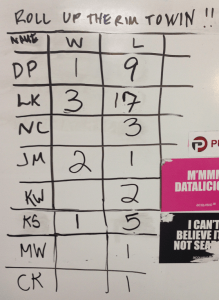 Tim Hortons tends to do a great job with their use of social media throughout the entire year, responding quickly to customer concerns, posting good visual content, and creating valuable, highly engaging posts. During the Roll Up the Rim season, they take their presence a step further by encouraging customers to use Twitter and Instagram to brag about their Roll Up the Rim winnings, asking customers to tweet photos of themselves with their winning cup and the hashtag #RollUpTheRim. The more advanced fans even take to YouTube to create amusing viral videos to express both their happiness (and frustration) with their roll up results.

It goes without saying that as a brand, you should be leveraging social media to your advantage. Finding unique ways in which you can encourage your customers to engage with you and your promotion online is a great approach to get people excited and spreading the word. Also, it ensures that as a brand your social media isn’t necessarily focused on selling your product (it never should be) – but rather on engagement with your customers and building that ever important brand-customer relationship.

is a great approach to get people excited and spreading the word. Also, it ensures that as a brand your social media isn’t necessarily focused on selling your product (it never should be) – but rather on engagement with your customers and building that ever important brand-customer relationship.

At this point, you may be wondering, “Lindsay – you spent all this time talking about how much fun Roll Up the Rim is, but have you actually won anything?” Well yes, after about ten straight mornings of ten straight losses, I FINALLY won – you guessed it, another free cup of coffee. However, what did I learn in that moment? That one win isn’t enough, and I will continue my struggle to win as many Roll Up the Rim prizes as possible. Why? Because not only is winning awesome, but Tim Hortons coffee is just that good.

It may seem out of reach, but if you keep in mind any of the above takeaways from Tim Hortons’ Roll Up the Rim, you’ll begin to see tangible results when it comes to your own promotions. Good luck!