Hostess recently filed a motion seeking permission to close its business and liquidate its assets, causing the internet to buzz with talk of bankruptcy and baked goods.

The shutdown is now on hold, as Hostess and union workers agreed to mediation at the urging of a U.S. bankruptcy court judge.

Even in light of the union strike, what was deemed last week as the end of an iconic 82-year-old brand feels shocking and sudden: just a week and a half ago, Hostess advertised a new Donette flavor on its Facebook page. For a company that conjured up that classic, American feel for so many people by baking snacks made of fluffy marshmallow and cream filling, the brand is now devoid of any and all fluff and frivolity. It’s all bare bones and solemnity: liquidation hearings commenced Monday, the Hostess website is simply a 404 page, and the title “Hostess Brands Is Closed” dishearteningly displays in Google search results for the term “Hostess”.

I was on Twitter when news about the closure reached its peak, and I noticed that the halt of Hostess infected people with a serious case of nostalgia: people mourned the end of snack goods saturated in childhood memories and of desserts drenched in days gone by.

They talked about tracking down and stockpiling Hostess products to enjoy the guilt-ridden yet gastronomically delightful sweets a few more times, and also to preserve what might soon become a mere vestige of American foodie culture.

I noticed a great amount of reminiscence embedded in talk of Twinkies, speculations on the fate of Sno Balls, and musings on the way of Wonder Bread. It’s clear that the products aren’t simply about the pure baked-good-induced bliss. They’re wrapped up in stories and symbols and history.

People (me included) who hadn’t eaten Hostess in years talked about how they needed to enjoy one (or three) more Ho Hos in an attempt to commemorate the end of the brand, reconnect with one’s inner child, and participate in an American tradition one last time.

Hostess hasn’t stopped making their products, but I think part of the nostalgia stems from the fact that its products have become less popular and fallen out of favor with many Americans due to the push towards healthy eating. Twinkies, arguably an archetype of unhealthiness, possess a certain stigma, but by monitoring social media conversation and blog comments on the impending liquidation, one would think Hostess baked goods never went out of style. Anything and everything Hostess became a valuable commodity. A search for “Hostess” on eBay generates 65,555 active listings. Three boxed of frosted cupcakes are listed at $9.50, while one seller is offering up what he or she terms “The Twinkie Motherload”,  a whopping 500 Twinkies for a whopping $5,000.

Chalk it up to American entrepreneurism, but the product descriptions on eBay are emblazoned with epitaphs and dramatic descriptions such as “RIP”, “some of the last”, “get them before they’re gone”, and the like. One seller even labeled a box of Hostess cupcakes “historic”. Lots of fruit pies and heaps of Suzy Qs lay dormant and unsuspecting until the next bidder claims their right to devour these saccharine tokens of American tradition.

The Hostess section of eBay is imbued with a frantic buying energy propelled by people trying to capitalize on packaged-good-driven panic and make a quick buck. Are people so eager to satisfy their nostalgia that they will gobble up these foodstuffs?

The whole Hostess business prompted me to start thinking about the connection between nostalgia and consumer behavior.

Nostalgia comes from the Greek nostos, meaning homecoming, and the Homeric word algos, meaning “pain” or “ache”. Once referred to as a fatal disease and used as a common diagnosis for depression until the 1950s, nostalgia now connotes a bittersweet, longing feeling. And researchers are saying it’s not all bad.

Our society seems to be inundated with various forms of nostalgia: people looking back in wonder and intrigue at past eras while simultaneously pining for the seeming innocence and simplicity of the past.

The popularity of shows like Downton Abbey, which captures the sumptuousness, grandeur, and drama of early 20th century England, and Mad Men, a compelling, provocative depiction of the sexism and gender dynamics of the 1960s, first came to my mind as obvious examples of modern-day nostalgia.

But there’s also 90s nostalgia, the tendency 20-somethings have to speak wistfully and longingly of now-deceased cultural phenomena like boy bands, Nickelodeon, Power Rangers, beaded animal key chains, and stirrup leggings. Such nostalgia nudges its way onto social media sites through things like the BuzzFeed Pinterest board dedicated to all of the trashy yet terrific 90s trends and through @The90sLife on Twitter (which currently boasts over 740,000 followers and a background that’s a mish mosh of wonderful fictional 90s characters). 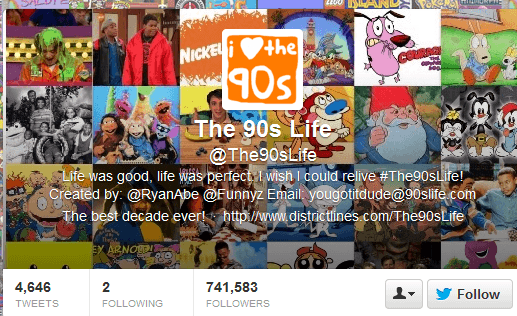 Twitter also serves up a heavy dose of early-2000s nostalgia. The account @YourAwayMessage has an uncanny ability to replicate in tweet form the obnoxious, cliche Away Messages every middle and high schooler shamelessly posted during the peak of those awkward adolescent years.

Most of us love glancing into the stylized (if slightly unrealistic) rearview mirror the television industry provides us with. We love gushing over the fads and fashion that once consumed our lives but that now seem silly and ridiculous.

How does this tendency affect our purchasing behavior? And how do brands and marketers capitalize on this penchant for the past that we possess?

Examples of brands that market and sell nostalgic products abound.

Meredith Tutterow, associate marketing director for Cheerios, commented on the Kid: “He was a very powerful character in his day, so we thought wouldn’t it be fun to get the Cheerios Kid to help educate these friends of his from 30 years ago, now all grown up, and help teach them about how Cheerios can help lower cholesterol.”

One of the basic premises behind nostalgic advertising, marketing, and product pushing is that people form relationships with merchandise and characters from their past, and these relationships never die. Seeing and being able to buy blasts from the past appears to activate a certain sentimentality in us and spark a chorus of “remember whens”. Is it effective when marketers reintroduce deceased products, breathe new life into old favorites, or harken back to the good old days in ad campaigns?

Research says it is. In scientific studies, nostalgia is typically defined as “a sentimental or bittersweet yearning for an experience, product, or service from the past”. According to researchers, consumers try to preserve the past through what is termed “nostalgic consumption activities”. Evoking nostalgic feelings through advertising arouse more positive emotions in people than non-nostalgic modern advertisements. These positive emotions spark a chain reaction: they cause people to look favorably on the ad, which causes them to look favorably on the product, which has a significantly positive influence on purchase intention.

Nostalgia has a very real and very tangible influence on our consumer tastes. Studies of music, movies, movie stars, fashion products, and cars show that styles popular during our youth can influence our lifelong preferences. We form lifelong attachments to things that we encounter in our late teens and early twenties, and we prefer these things amongst others.

The interesting thing is that we no longer need to have lived in a past in order to feel nostalgic for it (see: all those 20-somethings wishing they could live in the 1912 depicted in Downton Abbey); researchers distinguish between “real” nostalgia, for some remembered past time, and “stimulated” nostalgia, a form of vicarious nostalgia evoked from stories, images, and possessions.

BuzzFeed’s president, Jon Steinberg, told Ad Age that nostalgia is “one of the most popular types of content” and “some of the most shareable stuff”. Its article “25 Foods You’ll Never Eat Again” has over 4.3 million views. After reading the article and scrolling through the comments in which everyone mourned the passing of these once-great foods, I felt a sudden desire to consume a handful of Butterfinger BBs and wash them down with a Hi-C Ecto Cooler.

When brands and marketers engage the “social self” in us, it sparks a strong need for nostalgic products. When we then consume a nostalgic product (i.e., if I ate some Butterfinger BBs), the product would actually satisfy my need to belong. Even more intriguing is the fact that during social times of the year, like the upcoming holiday season, we experience an intensified need to belong to a group, so our desire for products that remind us of pleasant, comfortable times is greater. Cue the Coca-Cola holiday commercials that blend the contemporary and the classic in one seasonal, snow-covered advertisement:

Old-fashioned snow globes are juxtaposed with new televisions, and a traditional Santa and vintage Coke glass bottles meld with the modern, monotonous life of a convenience store clerk to market a traditional, all-American beverage.

This Is Your Brain on Nostalgia

Yet, one study purports that such advertisements can do more than evoke positive emotions. They can actually guide, direct, or alter consumers’ autobiographical memories. This study discovered that autobiographically focused ads can make events (even impossible ones) seem more likely to have happened to consumers as children.

In the experiment, participants viewed an ad for Disney that suggested they shook hands with an impossible character, like Bugs Bunny, when they were children. The ad increased people’s confidence that they had personally shaken hands with this character at a Disney resort even though such an event would be impossible. Quite surprising and maybe even unsettling just how powerful ads can be, yes?

Marketers will continue to imbue advertisements with nostalgic elements, and news about the Hostess dilemma suggests that we won’t stop indulging in the sweet taste of old memories any time soon.

As of a few hours ago, Hostess and The Bakery, Confectionery, Tobacco Workers and Grain Millers International Union failed to reach a mediation agreement, meaning that once people buy up the nation’s supply of Hostess baked goods, we’ll be reminiscing on confections and cream filling for years to come.