I’ve been doing a good deal of reading, writing, and editing, and being the unabashed grammar nerd I am, my eyes seem to be drawn to the grammatical mistakes in written pieces.

One thing I’ve noticed is incorrect punctuation when it comes to independent and dependent clauses. 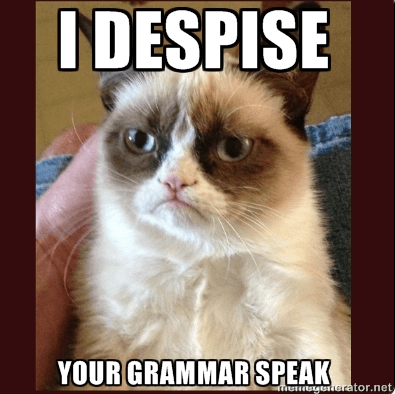 What’s important is the ability to write well. Even people who don’t write for a living still write in some way (email anyone lately?). And nothing shakes confidence quite like the inability to effectively and correctly articulate thoughts and opinions.

And, you see, grammar jargon is a lot like Grumpy Cat. It looks intimidating. It looks like something you want to avoid. But just like Grumpy Cat will melt into an adorable pool of fluff and cuddles once you become friendly with it, the daunting outward appearance of grammar speak disappears once you get to know and understand it.

And knowing and understanding grammar is quite simple, especially when it’s illustrated through memes. Let the pop culture-grammar lesson commence.

A dependent clause is a group of words that contains both a subject and a verb but cannot stand alone as a sentence because it doesn’t express a complete thought. Some examples:

When I see Grumpy Cat memes

Even though I majored in English in college

If you give a Grammar Nazi a weekly column

If you said any of the above dependent clauses aloud, people would expect you to say something else because the thought is incomplete. If you didn’t say anything else, you’d leave them hanging. When you see Grumpy Cat memes, what happens? Even though you majored in English in college, what? If you give a Grammar Nazi a weekly column, then what? Like the Overly Attached Girlfriend, a dependent clause cannot stand alone. 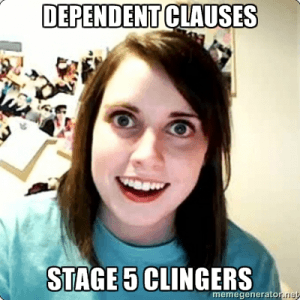 If a sentence starts with a dependent clause, we need to put a comma after the clause. Like so:

When I see Grumpy Cat memes, I laugh uncontrollably.

Even though I majored in English in college, I love math.

If you give a Grammar Nazi a weekly column, she’ll desperately try to make grammar relevant through the use of memes.

We can often identify dependent clauses because they start with dependent markers. In the above examples, the words “when,” “even though,” and “if” are dependent markers. Some others: because, while, after, before, despite, although, since, unless, until, whether, while, in order to.

Like the Overly Attached Girlfriend, a dependent clause needs someone (or in this case, something) to latch onto. It’s pretty lonely because it will never fulfill its dream of being a sentence. 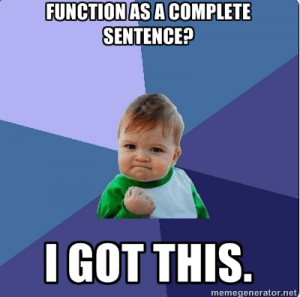 I majored in English in college.

I am proud to be a grammarian. When I see Grumpy Cat memes, I laugh uncontrollably. 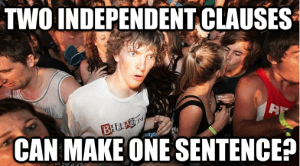 I usually don’t like cats, but I have strong feelings for Grumpy Cat.

I usually don’t like cats = independent clause number one

When we combine two independent clauses, we can punctuate them in a number of different ways.

Coordinating conjunctions sound intimidating, but the term simply includes the following words: and, but, or, nor, for, so, yet. I think these seven words have a mild case of Napoleon complex. They’re all very short words (none is longer than three letters), and they masquerade under the daunting, overwhelming term “coordinating conjunction.” 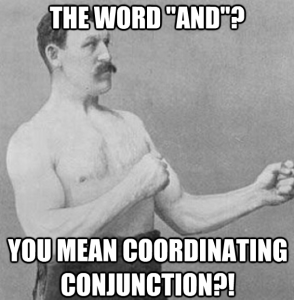 Despite the term, these seven words actually have a simple function: to join two independent clauses. Like so:

I like Dos Equis, but my favorite beer is Stella Artois.

We can also join two independent clauses with a semicolon, but semicolons have standards. We can use them only under certain conditions. We can’t just throw them in a sentence and hope for the best.

Use a semicolon to join two independent clauses that are closely related. Like this:

I didn’t get much sleep last night; I was up all night looking at memes.

I didn’t get much sleep last night; this morning I ate Cheerios for breakfast.

It wouldn’t make sense to join these two independent clauses with a semicolon because they’re not related. Remember, semicolons are a particular punctuation mark. They come with instructions. 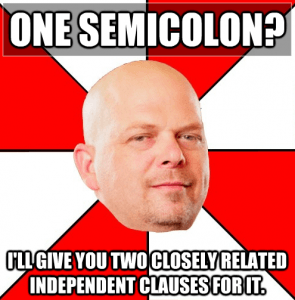 I’m a dog person; however, I would love to meet Grumpy Cat.

I’ve been looking at memes for hours; consequently, my eyes are tired. 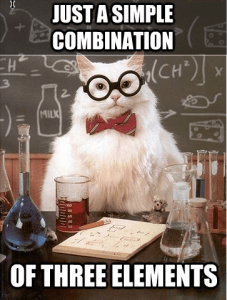 In the above sentences, two independent clauses are flanked by this simple combination: semicolon + independent marker word + comma.

It looks complicated; however, it’s actually quite simple.

We’ve reached the end. On that note: 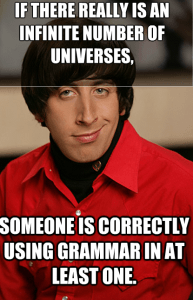 Topics In This Post: Dos Equis Grammar Most Interesting Man in the World One Does Not Simply Overly Attached Girlfriend

This is so great! I just started homeschooling my 6th grader (AP English) and the first thing I thought of for the chapter on dependent classes was memes. Thanks for writing this! I will be adding it to our lesson.