I recently read an article on Mashable that reported on a study from tech research company Gartner. According to Gartner, by 2014, 10 to 15% of social media reviews will be fake and paid for by companies. Chalk it up to naivete, but I found this news regarding fake reviews greatly disconcerting. Yelp and Urbanspoon are my go-to resources when I’m trying to determine whether a particular restaurant is worth trying. I read reviews on Amazon before I buy certain products. I like to believe that I can trust these reviews, or at least deem them honest opinions coming from customers, not companies.

I recently received an email from Groupon advertising a deal for a local restaurant. The deal seemed appealing, but in order to determine whether I should take advantage of it, I went on Yelp and read a smattering of reviews for said restaurant, the majority of which were positive and praiseworthy. I decided to purchase the Groupon, yet when I visited the restaurant, I was disappointed, to put it euphemistically. I found it perplexing that a restaurant with favorable reviews was so mediocre. Maybe I ordered the wrong thing? Reviews are highly subjective, so perhaps the discrepancy between my experience and the experience of others was merely a matter of taste?

In light of the Mashable article, I began to think about online reviews in a different context. A plethora of sites (not all social media in origin) feature reviews, purportedly from customers: Yelp, Urbanspoon, OpenTable, Amazon, and TripAdvisor, to mention a few. If the reviews on these sites are shams, then isn’t the entire existence of these sites threatened? Why would people use these sites if false reviews coexist amongst authentic ones? Were the reviews I read of my local restaurant, the reviews on which I based my Groupon purchase, fake?

I wanted to assess the state of online reviews: whether or not people trust them and what type of impact they have on small businesses. I also wanted to scrutinize this issue of fake, compensated reviews. What do they mean for consumers, for companies, and for marketing in general?

The Power of Peer Recommendations

Online-review sites are wildly popular: according to The Wall Street Journal, Yelp draws 71.4 million unique visitors each month. Urbanspoon attracts 28 million visits per month, and OpenTable recently announced that the site’s users have posted a grand total of 15 million reviews. While researching, I discovered why people flock to these sites and why they’re so eager to read and review. Consumers trust recommendations from peers over all other forms of advertising:

Online reviews seem like a win-win for consumers and businesses. People trust opinions posted online, ergo it seems that they should be able to trust sites like Yelp and Urbanspoon, where individuals write on both positive and negative experiences. Simultaneously, these sites allow businesses to tap into the power of word-of-mouth marketing, which, according to the stats above, is key to sparking the interest of consumers and generating sales. Positive reviews are like free publicity: short posts that endear a product and/or establishment in the eyes of consumers. They boost credibility, but if a business or an individual uses inherently non-credible means to enhance its credibility (read: purchasing reviews), isn’t that an effort contradictory, paradoxical, and all-for-naught?

And yet, online reviews are a tricky business. A study by the University of California, Berkeley found that Yelp ratings truly do affect businesses. Restaurants with higher Yelp ratings were fully booked half the time, while those with lower ratings were booked only about a third of the time. Even an extra half-star on a Yelp rating can increase a restaurant’s business by 19%.

And reviews aren’t only relevant for restaurants. Consider Amazon, where reviews crowd the page for every product from books to pet supplies to arts and crafts. Ratings appear next to the image of any product, and a small graph that deconstructs the various customer ratings along with the “Most Helpful Customer Reviews” follows. 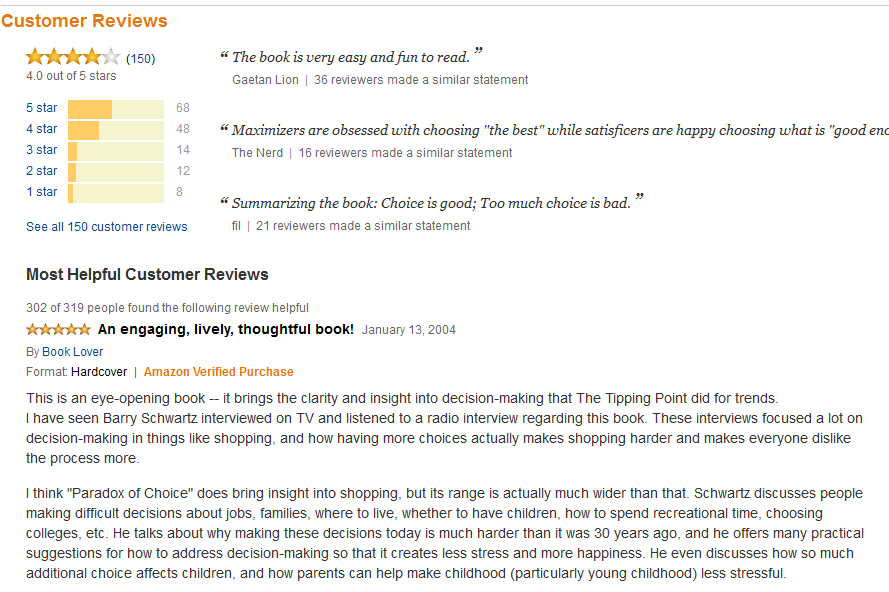 With the trust and reliance people place in online reviews coupled with the UC Berkeley study, it would appear that they can make or break any brick-and-mortar establishment and/or commercial product. A fulsome endorsement will only help, and a critical cri de coeur will certainly hurt, right?

People clearly buy into this belief. The research from Gartner is the tip of the iceberg. The New York Times published three different articles on the business of purchasing reviews. Apparently, reviews are a valuable commodity, and the people who pen them engage in a commercialized quid pro quo: an individual writes a review to publicize something, and said individual is financially compensated. The NYT spotlighted GettingBookReviews.com, a (now-defunct) site where authors could buy book reviews. It also discussed this commercialization of reviews in light of a specific Kindle cover sold by VIP Deals. Customers who purchased the Kindle cover received a letter advertising a tantalizing (if illegal) offer: people who wrote an Amazon review of the product would receive a full refund. The Kindle cover garnered 4,945 reviews on Amazon, with a virtually perfect 4.9 rating out of 5. (Amazon deleted the reviews and took down the product page after the NYT send Amazon a copy of the VIP Deals letter.)

After spending a few hours immersed in these NYT articles, I finished a more aware, if more cynical and slightly disillusioned, consumer. According to the NYT,

“Consumer reviews are powerful because, unlike old-style advertising and marketing, they offer the illusion of truth. They purport to be testimonials of real people, even though some are bought and sold just like everything else on the commercial Internet.”

Prompted by disenchantment, I conducted my own mini-investigation into the business of buying reviews via Fiverr. A mere click of the “Reviews” tab generated these results:

Say it ain’t so! According to research, 70% of us trust online reviews, but can online reviews be trusted? Gartner says that by 2014, one in ten reviews will be fake and paid for by businesses, and while this percentage may seem small, the invasion of falsified reviews casts serious dubiousness upon any online-review site; it makes these sites seem as if they are founded upon a questionable, shaky foundation of financially backed shams rather than trustworthy consumers compelled to memorialize a memorable (or forgettable) experience to write. And perhaps the most disheartening aspect of these inauthentic reviews is the fact that people cannot distinguish between the real reviews and the fake ones. A team of Cornell researchers recently published a paper about creating a computer algorithm for detecting fake reviewers. They examined what they termed “deceptive opinion spam,” fictitious opinions that have been deliberately written to sound authentic, and found that people can’t differentiate between deceptive and truthful reviews.

Now, judging from the comments I read on the New York Times and Mashable articles, people either chalk up fake reviews to the ever-pervasive commercialism of contemporary society, brush them off with a cavalier indifference, or mourn this manipulative marketing phenomenon.

The Federal Trade Commission has attempted to clamp down on fake reviews: in 2009, the FTC determined that if a reviewer is compensated for writing a positive review, he or she must disclose that information. If he or she doesn’t, that is equivalent to deceptive advertising and will be prosecuted. Yet, fake reviews obviously still abound, as seen in the results I found on Fiverr, research from Gartner, and the articles by the New York Times. And, I think the true problem is that they distort the purpose of online-review sites. They cloak these sites in a shroud of uncertainty, because credibility becomes one giant, looming question mark.

Another question mark: Will these inauthentic reviews overshadow the genuine ones? Will people gravitate away from online opinions as the issue of fake reviews becomes more pronounced?

I’ll be glancing upon the Amazon and Yelp reviews with more skeptical, suspicious eyes.

Though, even if falsified reviews increase in number, one thing that will remain constant is the Amazon reviews that are unwittingly hilarious.

My personal favorite: a review of the film Sleepless in Seattle penned by someone with the charming pseudonym “Fred Nietzche.” 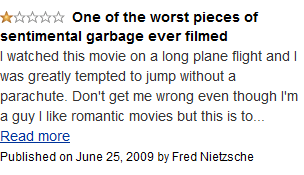 Something tells me this review wasn’t compensated.