Talk to some people, and you’d think millennials are uniquely responsible for not just clickbait, but short attention spans, poor work ethics, and (possibly) bubonic plague.

The fact is, though, that clickbait content has roots that go back well before man buns and hoverboards. The term “yellow journalism” was coined in the late 19th century to describe a particular ilk of newspaper writing that eschewed real journalism for flashy headlines, shoddy reporting, and sensationalized (read: fictional) representations of events.

The practice became common during a battle for readership between two prominent publishers, William Randolph Hearst and Joseph Pulitzer ‒ kind of like a 19th century BuzzFeed vs. Uproxx, if you will. In those days, the effects of this kind of sensationalism were profound ‒ even helping to push the U.S. into war. It’s less clear whether clickbait-infused journalism has such a serious impact today ‒ but the comparison still merits consideration.

In today’s iteration, clickbait tempts us through flashy headlines all across the web. For readers, publishers, and advertisers, it’s important to decide what side of the clickbait divide you want to be on. Will simply getting your content clicked on make enough of an impact on your bottom line? Will the lackluster engagement that’s sure to follow a baited click be worth your time? Do the ends justify the means?

As for readers, we’re just trying to get through our web surfing days without being subjected to too much deception.

Is Clickbait a Problem For Publishers? 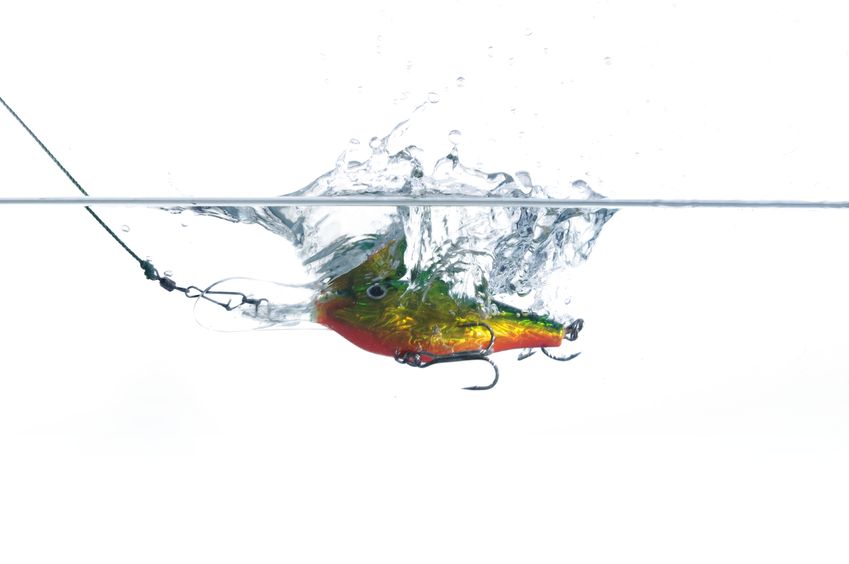 Beyond the moral implications of tricking people, businesses and publishers should shun clickbait for practical reasons. The web presence you create for your business ‒ from your content to where you rank in search engine results ‒ has a long-lasting impact on your relationship with your audience. If that presence is stylish, but devoid of substance, your image in the minds of those customers will reflect that. Besides, you want to create content for the sake of improving metrics that actually matter ‒ like your revenue ‒ and not to merely rack up clicks and impressions.

when you wanna do the You Gotta Click This To Get The Answer clickbait thing but you’re not that good at it yet pic.twitter.com/PRfgSYOmcN

There’s an important distinction to draw between articles that use flashy headlines to mask dull content and articles that are frivolous, but accurately headlined. In other words, people often consider BuzzFeed’s animal-oriented listicles as particularly egregious forms of clickbait, but in reality the headlines are typically pretty honest about the content. Also, the nefariousness of clickbait doesn’t really have that much to do with whether the headline is appropriate as it pertains to the content itself. It has far more to do with whether the actual article is misleading or flat-out wrong.

In the case of BuzzFeed’s animal listicles, how can pictures of cats be factually wrong or misleading (insert “…if they are, I don’t want to be right” joke here)? BuzzFeed would likely be the first to admit that listicles like these don’t qualify as serious journalism, so the silliness of the headlines actually fit well.

They have been criticized for the business model as a whole, which places the silly and the serious under one roof (using the former to drive revenues that pay for the latter) in a way that makes it difficult to determine where one ends and the other begins.

Some Thoughts On The Listicle

When people talk about clickbait, a common example given is the aforementioned BuzzFeed listicle. Listicles are, appropriately enough, articles split up into lists of things – sometimes ranked chronologically, sometimes ranked by merit. Others are ranked completely randomly, in which case the whole point of numbering them in the first place seems to fly out the window (other than to facilitate comments between friends – “19 is so us, LOL!”).

But is a listicle inherently clickbait? 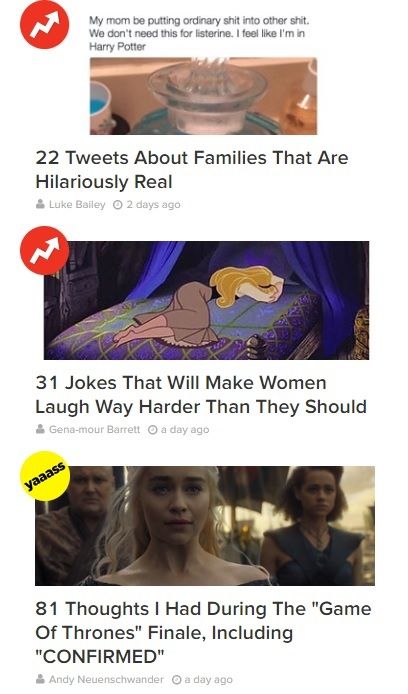 The key characteristic for something to be considered clickbait is its inability to follow through on what was initially promised. Many times, publishers of listicles will express the absurdity of the post with a sort of tongue-in-cheek frankness in the title. By doing this, they’re basically giving the readers a “cough cough wink wink” heads up as to the seriousness of the content.

But there is another form of clickbait, in which the deception isn’t strictly contained within the article’s title. For many, clickbait is a more general journalistic genre, where the author isn’t reneging on the promise made in the title, but on the general assumption of quality that a publication has built up through years of reputation and prestige.

This is the version of clickbait that media professionals point to when bemoaning the way digital publishing has muddled the waters of journalism and commerce. Since so many legacy publications – The New York Times, The Atlantic, Washington Post, etc. – are forced to devote at least some resources towards click-friendly structures and topics, their respective (and respected) brands are susceptible to taking a hit.

Many readers (especially older ones) find these newer types of content off-putting and unfit for a respectable publication. Unfortunately, in a journalistic landscape where digital has usurped print and clicks are king, they’re likely here to stay.

Clickbait can be hard to pin down and define. One thing is for sure: you don’t want to read it, and you don’t want to be the kind of company, publisher, or writer who produces it and sends it out into the world.

Well, the most important thing to understand is the nature of your audience. As we looked at with the BuzzFeed examples, readers don’t necessarily have a problem with many of the characteristic “clickbait” clichés – as long as they’re expecting them, and the content falls in line with your overall brand.

In any case, it’s always best to be honest when crafting your headline. Bold, attention-getting strategies are great, but it’s vital to keep them rooted in the actual content of what’s coming after the user gives you that ever-valuable click.