The emergence of social media has undoubtedly transformed the way we watch sports. Facebook, Twitter and Instagram have provided fans with a unique platform to interact with their most beloved athletes and teams.

According to an infographic by KT Tape, citing several sources such as ESPN and CBS sports, 83 percent of sports fans will check social media sites while watching the game. Sixty-three percent will even visit social media sites or apps while they are watching a sporting event live.

The culture of sports as we knew it five years ago has vastly changed, “and thus improved, “thanks to the presence of social media. With that said, professional sports franchises and college teams alike are both investing in and utilizing all possible social media channels to help strengthen their brands.

While the on-the-field product is ultimately what matters most to fan, it is equally important to develop winning content and a champion the likes of Facebook, Twitter and Instagram as well. Here’s a look at some of the top pro sports franchises in the game (the social media game, that is) and how they stack up against the finest consumer brands on the market.

The San Francisco Giants won their second World Series title in three years last month after completing a near implausible run to the Fall Classic, in which they swept the Detroit Tigers in four games. But as it turned out, the Giants took home more than world-championship honors this fall.

As the Giants closed out the postseason, they just about reached the pinnacle of social media influence with a near-maximum Klout score of 99, matching President Barack Obama in the process. The Giants’ winning attitude has evidently translated into an award-winning social media department.

San Fran’s social media crew launched and prominently promoted the hashtags #OrangeOctober and #SFGiants throughout the playoff run, while utilizing several other timely and clever hashtags, such as the “#rally movement.” The hashtag #rallyzito was sparked during Barry Zito’s masterful performance in Game 5 of the National League Championship Series, a win-or-go-home game for the Giants.

The Giants’ Facebook page is flooded with superb photos, images from their Instagram account, several crafty calls to action, and countless posts to engage with fans. All professional sports franchises would be wise to take note.

“The number of people talking about you, the positive sentiment, the way that people are using our hashtag, you can tell we have a really passionate fan base,” Giants director of social media Bryan Srabian told ESPN.com. “Even just from the eyeball test, you can measure [the engagement] is high. It’s really exciting.”

The Giants make sure they incorporate all of their social media accounts on their Facebook page, including Instagram, focusing heavily on visuals. They make it obvious that their Facebook page is more than just about baseball. They bask in the success of their brand, celebrating the very reasons why people enjoy their product, on and off the field.

I expect the Giants will continue to defend their World Series title and their status as a social media champion.

L.A. Kings of Twitter; Kansas City Chiefs, Not so Much

For most professional sports franchises, social media is a platform to interact with fans, make announcements and build a winning brand. Rarely is a tweet sent out by a sports team meant to be controversial or snarky.

But this past spring, one NHL franchise took an entirely different approach, and boy, was it refreshing. The Los Angeles Kings, like their neighbors in San Francisco, snuck into the playoffs only to put on an impressive, convincing run to a championship, downing the New Jersey Devils in the Stanley Cup Finals.

The Kings added 60,000 Twitter followers after the start of the 2012 postseason, much thanks to a blatantly partial yet awesomely witty presence on the social medium. so good that someone created a blog in honor some of its greatest work.

The Kings threw jabs at their opponents throughout the Stanley Cup playoffs, including the tweet shown above. They were also responsible for the most re-tweeted tweet of the postseason: “To everyone in Canada outside of BC, you’re welcome;” this received 14,388 retweets and came following Los Angeles’ 4-1 series upset win over the top-seeded Vancouver Canucks, according to Sports Networker.

While they spent the majority of the postseason on the offensive, the Kings proved it could counter on defense as well.

Going after a celebrity is a gutsy move, but with that type of zing, it shows that the Kings, “as a brand”, are tough as nails, which in-turn energizes a fan base. If you are a hockey fan and in need of a ridiculously hilarious Twitter account during the lockout, follow Old Spice for the time being. Look no further than its Twitter bio: “Drop-kicking dirt and odor, doing a clothesline on them and then slamming them with a folding chair.”

When the NHL gets back on the ice, however, the L.A. Kings are a must-follow.

Conversely, there are some brands that need to “get a clue” when it comes to social media (Twitter, in particular). With the growing presence of social media in sports, teams are investing in social media professionals to run their accounts. In some cases, these “professionals” have some type of emotional attachment to that particular team, whether it be as a longtime employee or (you guessed it) as a fan.

That proved to be the case for one NFL team, the Kansas City Chiefs. After a fan lashed out in displeasure of the Chiefs disappointing start, their Twitter account responded foolishly in defense of the flailing franchise.

Harsh, sure; but that’s the beauty of Twitter. It’s a platform for fans to directly cheer or criticize their favorite teams and athletes. In response, the Chiefs sent the following in a direct message to Wright:

Unfortunately for the Chiefs, Wright works as a global social media manager in Kansas City. 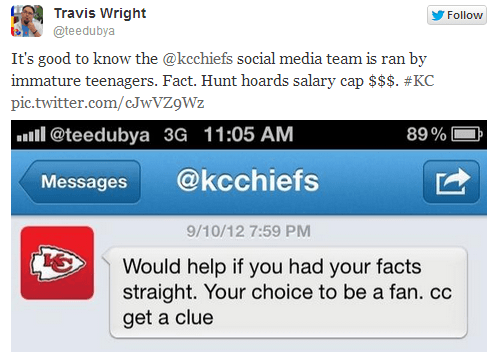 Hours later, the account manager for the Chiefs’ Twitter account publicly responded: “I apologize to the fans for my response to a tweet sent to me earlier. No excuse for my actions. I am truly sorry and it won’t happen again.”

Not only is it a lame response, but since the Chiefs account blocked Wright following the initial tweet, he never saw the apology. Now, there have been plenty of Twitter fails in recent memory, but something tells me the Chiefs account will be on its best behavior from this point on.

Professional sports and Instagram is a match made in heaven. The Boston Celtics were the first pro sports team to create an Instagram account, according to The Next Web, and thus far they have certainly championed the photo-sharing app. The early embrace has led to more than 290,000 followers on the platform. The Celtics boast 308 photos to date.

The Celtics fuel fan interaction with a behind-the-scenes look at players and coaches prior to games, providing both locker-room access and a more personal look at the team’s favorite NBA super stars. A majority of their most recent photos garnered more than 10,000 likes along with hundreds of comments.

Unfortunately, for some sports teams, their Instagram profiles are flooded with images taken by professional photographers, often for the AP or Getty. The Celtics, meanwhile, provide candid, authentic material for their diehard fans.

As a sports fan, it’ll be interesting to see how pro sports teams further adopt Instagram into their social media strategy. Just be careful when snapping pics in the locker room.