Google’s search ranking algorithms are always evolving to adapt to the changing habits and demands of its users. After all, Google’s primary responsibility (besides its own bottom line) is to its users – and the algorithms that determine rankings are meant to give those users the best possible results in the best possible order.

Meanwhile, as Google keeps improving at this, the goals of SEO professionals continue to move towards providing great site content (as opposed to developing tactics and strategies specifically to appease Google).

As these two processes unfold, Google’s publicly announced algorithm updates continue to be milestone moments for both optimizers and users (whether or not they’re aware of them). One of the most important in recent years is the rollout of Penguin 4.0, which occurred at the end of September.

The original Penguin algorithm came out in 2012, considered by Google to be a layer of defense against web spam in general. As it turned out, the sites targeted most directly by Penguin were ones that had backlink profiles filled with unsavory, illegitimate sources.

The first three versions of Penguin were all designed to run intermittently, meaning that penalties could only be leveraged (or removed) when these updates were rolled out. Also, in order for sites with penalties to recover, they were forced to fill out a reconsideration request and diligently remove the links that they suspected Google was penalizing them for. No matter how thoroughly they completed this process, there would be no real recovery until Google rolled out the next update, which could mean a lot of costly waiting. 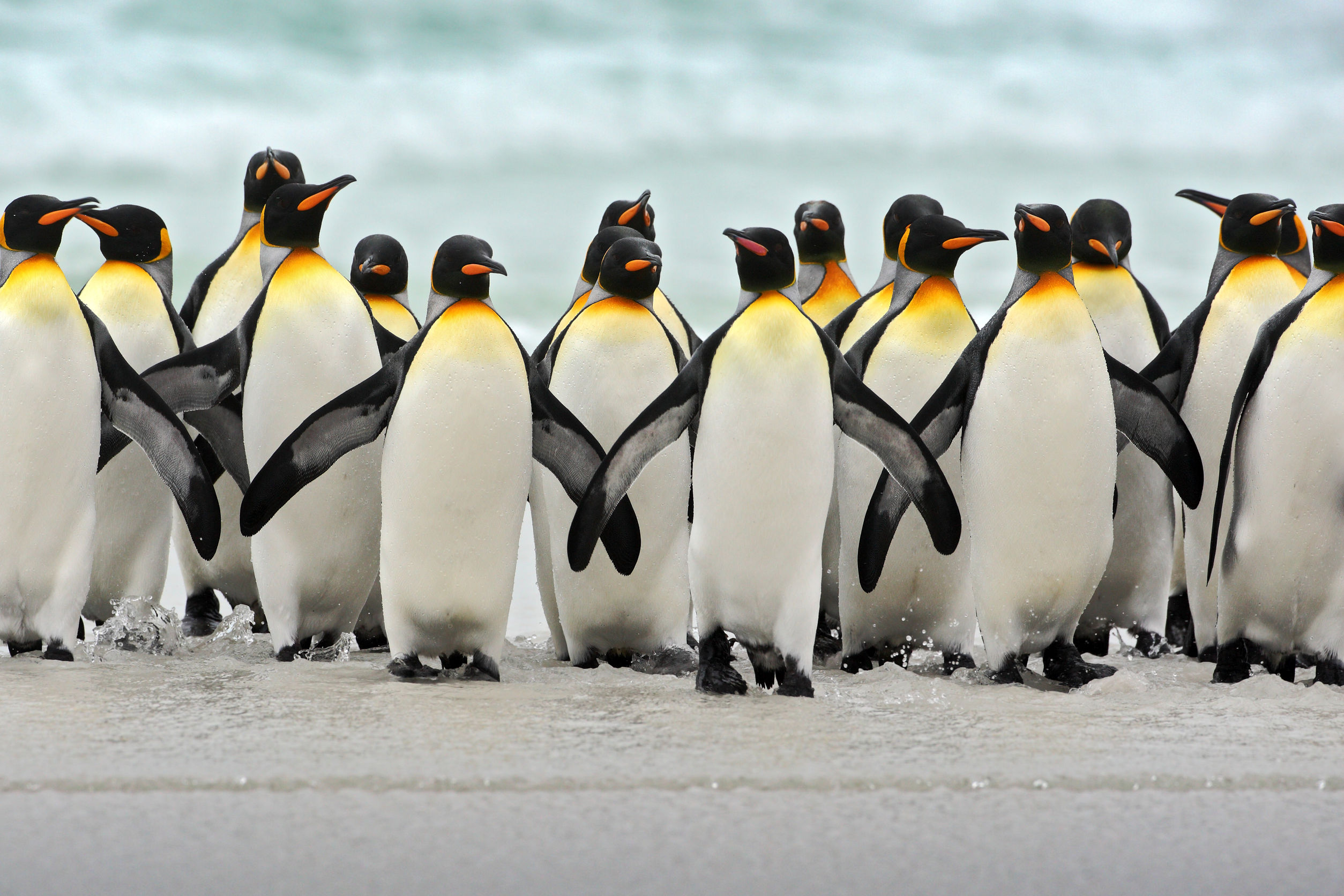 Penguin 4.0 changes all of that.

Google’s stated goal for Penguin 4.0: that it will lead to a renewed “focus on creating amazing, compelling websites.” 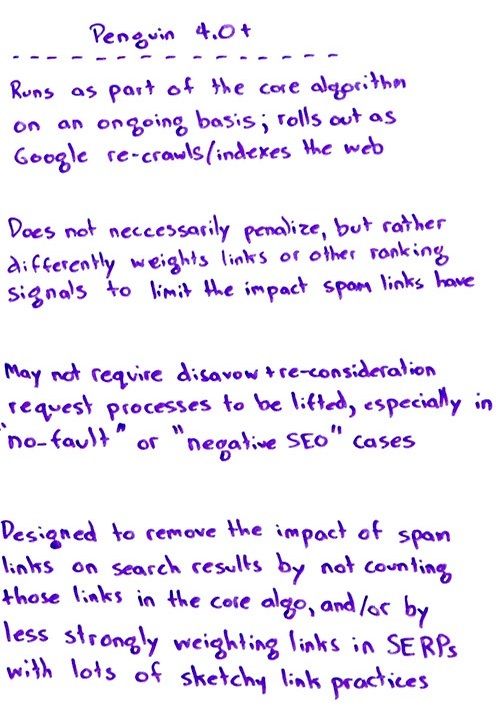 One of the most buzzworthy news items in the Penguin 4.0 aftermath is that Google is now devaluing bad links as opposed to demoting sites because of them. The distinction first started receiving public attention when high-ranking Googler Gary Illyes had an exchange with popular SEO journalist Barry Schwartz. In it, Gary and Barry discussed why webmasters will likely be happy with the new changes:

Illyes, clarifying the difference between the two verbs in an SEO context, said,

Demote as in adjust the rank of a site. Devalue as in, ‘oh look, some crap coming towards this site. Let’s make sure it won’t affect its ranking.’

So in the past, bad links could result in large-scale demotions in search rankings for your entire site. Now, Google’s focus will be on stripping those links of their impact individually.

It might be helpful to think of it in an athletic context. In a sport like hockey, teams are penalized for doing something outside the rules, like tripping a player on the other team. This penalty is like a rankings demotion in that the entire team suffers, not just the individual player.

On the other hand, a team might score a goal, but it may not count because of minor infraction – like kicking the puck, for instance. The team isn’t penalized, they just don’t get the benefit of having that goal count. This is how devaluing of links works. You won’t get the benefit of higher rankings that backlink might have brought had it slipped by the algorithm, but your entire site also won’t penalized as a result of catching it.

Now, it’s worth noting that manual penalties still exist. If Google feels that your site shows evidence of prolonged, intentional collection of bad links, you very well could receive one. If that becomes the case, it will still make sense to use the Disavow Tool, which was rolled out in 2012. The Disavow Tool was built to give webmasters a way to tell Google, “Wait, don’t worry about that link. We know it’s spammy; we don’t want anything to do with it.”

In fact, even aside from manual actions, Google has said recently that using the Disavow Tool is still a good way to make absolutely certain that Google knows you are not actively seeking to benefit from bad links.

Negative SEO is the practice of intentionally harming a competitor’s backlink profile by “aiming” large numbers of spammy links at their website. As we mentioned before, external links (those that aren’t on your site, but point to it) are an integral part of healthy linking. So, for some nefarious web user to harm your site with negative SEO, they wouldn’t have to actually hack the site or gain access to its back end.

@ShahMenz@Marie_Haynes@jenstar I’d love to know the site & get more examples. To this date we still haven’t seen a real example for nSEO — Gary Illyes (@methode) September 30, 2016

Luckily, this phenomenon has always been much scarier in theory than it has ever turned out to be in practice. Google is extremely careful when developing new algorithms, and many of them are sophisticated enough to analyze whether links appear to have been self-acquired or “aimed at” your site by a competitor.

But some in the industry believe that Penguin 4.0’s forgiving approach to spam links means that practitioners of negative SEO will have more opportunity to experiment with different methods of harming other sites. Theoretically, since Penguin will now be approaching spam on a more granular, link-by-link basis, purveyors of negative SEO could take all the time they wanted to find links that Google would consider bad, then aim them at their target site in hopes that Google would hit it with a manual action (which, as noted above, Penguin 4.0 still leaves room for).

But so far that doesn’t appear to be much of a concern. Gary Illyes was asked about it on Twitter and advised that Google had yet to come across “real examples” of negative SEO. Nevertheless, it’s still early enough in the game that as Penguin 4.0 continues to grow and black hat optimizers have more time to tinker, it will be worth keeping an eye out for.

In another social media interaction, Gary Illyes confirmed that the Penguin 4.0 change from demoting to devaluing would cause previous Penguin penalties (demotions) to be removed for sites. This was very important because it meant that many webmasters – who previously had no reason to be hopeful for imminent recovery – should soon be seeing exactly that.

Although it’s still too early to know the full impact of Penguin 4.0, we’ve already started to see those recoveries occur. Prominent SEO journalists and professionals have noted significant boosts in traffic and rankings as a result of the Penguin 4.0 rollout.

Moving forward, Penguin-related issues and/or recoveries won’t be quite as easy to pinpoint due to its real-time, granular nature. That’s why it’s particularly important to take notice of the changes that are occurring now. The more we understand about how Penguin 4.0’s initial impact has manifested itself, the more we’ll be able to practice smart SEO in the future. So far, most Penguin 4.0-related changes in the SEO world have been positive for those who approach optimization responsibly.