Is the Disavow Tool really a silver bullet? No, but if used correctly, this can be an important tool for anyone looking to either lift a Google penalty or ensure that your site is safe from Penguin updates in the future.

For the past couple of years since the original Penguin update, links, and how they work with Google’s rankings have fascinated me. Luckily my position within Mainstreethost’s Enterprise Department allows me to dive deep into websites and thoroughly examine backlinks and how they’re affecting the websites I worked on. This eventually led to me cleaning up backlink profiles for the rest of our department’s clients, and eventually led to the development of our link analysis/cleanup packages. I’ve combed through backlink profiles of all different sizes and qualities and have spent countless days creating disavow documents to help get the sites away from their link troubles.

A Little History on the Disavow Tool

After much speculation and the FUD (fear, uncertainty and doubt) swirling around the original Penguin update, Google unveiled the Disavow Tool in October of 2012. This tool allows you to tell Google to “ignore” inbound links from any specific URLs or domains as a whole. This tool gives website owners the ability to have some semblance of control over their website’s backlink profile. Before the disavow tool, there was little that could be done except to manually have the poor quality links removed one by one, which could only be done by contacting webmasters and other site owners, usually through e-mail or contact forms.

The Disavow Tool can be dangerous when used improperly, so dangerous that Google displays a warning prior to its use. Submitting a disavow document with the incorrect links can be very damaging to your website, while at the same time, failing to omit the offending links would also be a waste.

The Process of (link) Elimination

Identifying what are considered “good” and “bad” links isn’t rocket science, and there is an easy rule of thumb to follow when making this determination.

Would I want this link to exist if Google did not?

If your answer to this question is yes, then you would want to keep that link associated with your website. If your answer is no, then it would most likely be in the website’s best interests to have the URL (or domain) of that link added to your disavow document. Google’s Matt Cutts has said that one of the biggest issues is that people are using a fine-toothed comb to go through their links when they should be using a machete. While there may be some links you include on your disavow document that might not be hurting you…yes, a wise man once told me, “sometimes you got to burn down a barn to kill a few rats”.

The disavow document gives you the chance to tell Google to “ignore” either individual pages, or entire domains if you have a site that links to yours excessively. To be safe, if there are more than a few links, or if there is the possibility of more links being added from the domain, I tend to disavow links at the domain level instead of fussing around with individual URLs. This way, if their website undergoes any structural changes that impact their URL structure, duplicate any pages or any other unforeseen actions that could add more links to your site, you’ve covered your bases and those poor links should be automatically ignored (since they are already included in the disavow document).

There are three main instances where the Disavow Tool comes in handy: algorithmic penalties, manual penalties and for preventative maintenance.

Algorithmic penalties can be the trickiest of reasons to utilize the disavow tool. You won’t receive a message in Webmaster Tools letting you know you’re dealing with an algorithmic ranking penalty. One day, you enter one of your most common key phrases and notice that your site has dropped 10, 20 or even 50 places in the SERPs. This is how you’ll come to the realization that you’re facing an algorithmic penalty. 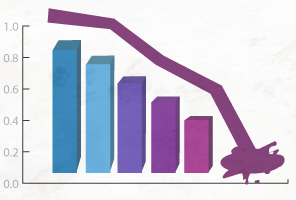 Submitting a disavow document to eliminate your algorithmic penalty is unfortunately not a quick fix. Once you submit it to Google’s Webmaster Tools, you must wait for the next Penguin Algorithm refresh. At the time of writing this, it has been almost a full year since the last Penguin update, so as you can guess, this is extremely trying to many website owners waiting for their websites to recover.

Another thing to keep in mind with algorithmic penalties is that when your disavow document is accepted and the penalty is lifted, your site will not automatically return to where it was previously ranking. This is due to the fact that your site’s rankings were most likely artificially inflated to that point in the first place, thanks to the unnatural links.

An example of an algorithmic penalty is a site that came to us 6 months after the first penguin update. They were hit hard by that algorithmic update, and without warning, their rankings took a stumble and their overall site traffic dropped by around 50%. When this client gave us all his old reports and updates from his previous SEO company, we realized almost immediately that the site was dealing with a link penalty. The majority of these links were coming from poor quality directories and a lot of blog comment spam.

After a thorough examination of the backlink profile, we compiled a complete disavow document. Weeks and months passed, and their busy season came and went. Since we were dealing with an algorithmic penalty, there was no way to have the site reviewed manually. We had to wait for the Penguin algorithm to update before the disavow document would be taken into consideration. October 2013 was here and gone, and due to it being the beginning of their slow season, the slight uptick in visitors didn’t really set off any notices. But we were hopeful that the site had returned and the rankings went along with that.

The big test was their busy season. We did not fully realize that they had overcome their penalty until spring 2014 when their normal seasonal upswing took place. Their analytics showed their site had recovered to where it was prior to the initial Penguin update and continues to trend upward. 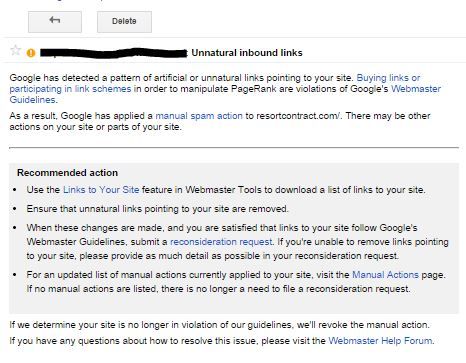 Some website owners look at getting a manual penalty as the end of the world, and that’s just not true. Many SEO experts actually argue that having a Google web spam team member single out your site and levy a manual spam action on your site is actually easier than dealing with an algorithmic issue. Thanks to Google’s Webmaster Tools, at least you’re aware of what kind of penalty you are facing, and what you need to do in order to get the penalty lifted.

In addition to that, upon submitting the reconsideration request to have the manual action lifted, Google will reply, letting you know if what you did was enough to remove the spam action. Algorithmic issues can leave you guessing and hoping for the next Penguin update to see your site bounce back.

The disavow tool can help us approach these issues when dealing with a manual penalty. When you can’t reach the webmaster, or they’re trying to have you pay them to remove your link, the disavow tool will help. Keep in mind that in my experience for manual penalties, you do need to physically remove a good portion of the links in order to have Google lift the penalty; the disavow tool alone will not be sufficient.

One specific case where I dealt with a manual penalty, we were having an extremely difficult time in getting quite a few of the links removed. The website owner swore up and down that he never used a company that bought links, and towards the end of the link analysis/e-mail outreach portion, the owner suddenly remembered another SEO company that he was doing link building with. He was able to provide us with contact information, and we worked with that other company to have an extremely large number of links they had under their control removed from the web. 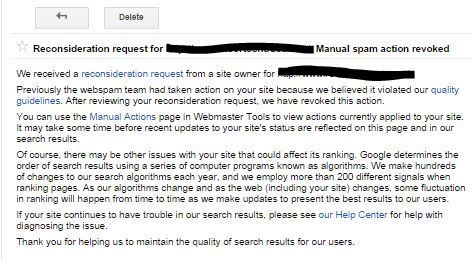 With the majority of the poor quality links removed, we submitted a disavow document with the remaining lousy backlinks, and then waited a few days to submit a full reconsideration request. Less than two weeks later, we received the notice that the manual action was removed.

There are also “preventative” uses for the disavow tool if your website is not facing either an algorithmic or a manual penalty. One of the first things that’s completed when a new client is assigned to my department is a backlink analysis. This way we know what kind of backlink profile the site has and it also gives us an idea of the tactics the company (and anyone they worked with) had used in the past. There are several cases where we started out with an account behind the 8 ball due to a previous company’s spammy or black hat SEO tricks. Identifying these issues before they become Google penalties is a major key to success.

Back in April, I was alerted to what could have been a negative SEO attack on a large site we manage, so we ran a routine backlink analysis, and what we saw was troublesome. Now, this site hadn’t been hit with any penalty, felt any dip in rankings or any ill effects of this negative attack just yet, so I was happy to have the opportunity to address the situation before it was able to cause any harm. Hundreds and hundreds of new links were coming in, all from unrelated forums or blog posts.

Fortunately, whoever had implemented this negative SEO strategy wasn’t very good at what he/she was doing. The vast majority of their backlinks had used the same 3 sets of anchor text and were all placed in blog comments and pingbacks, making these links incredibly easy to identify. What made it even easier to manage was that as fast as the links were coming in, the forums and blogs that were being commented on for the links were going offline, so the negative SEO attack never got much traction.

To protect against this, we went ahead and set up a disavow document disavowing all of the “negative SEO” links at the domain level, as well as carefully pruning through several other backlinks that had accumulated throughout the years. Within the Disavow Tool, you have the capability to make notes within the document. For this specific site, we included an entire section of the disavow document to the links we wanted not counted due to this negative attack. This entire situation ended up being a blessing in disguise as it gave us the opportunity to clear up the site’s backlink profile while ensuring that this attack was unsuccessful.

Just like Google warns, the Disavow Tool is not to be taken lightly, and should only be used when it’s entirely necessary. This tool is necessary to keep your website healthy when there are links that you do not have control over. Before, there was nothing you could do about the links that were built by your cousin’s friend’s brother who kinda sorta knew something about SEO 4-5 years ago… or that high school kid you hired on Fiverr. Trying to market a website that is built on a shaky foundation of spam links is just like trying to kick water uphill….it’s not gonna happen!

Have you noticed unexplained drops in traffic or rankings, or received a manual penalty notice in your Webmaster Tools you think backlinks are the cause of? Contact us today and we can get to the bottom of your link issues! 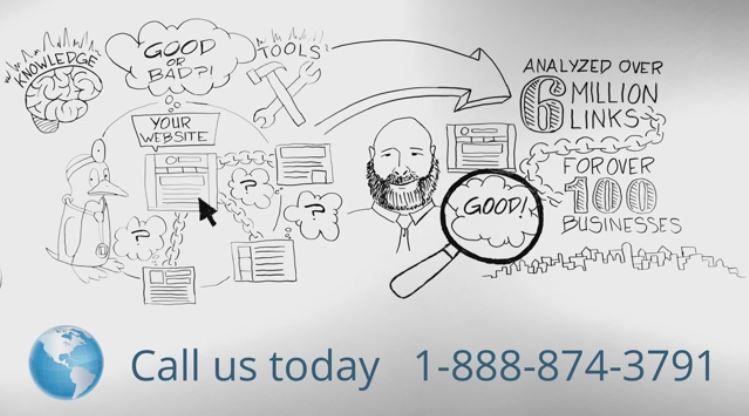