Social Media Marketing: Easy to Do, Hard to Do Well.

The people who make up your audience use social media to interact with their friends and family members – you know, people they actually know and (presumably) like. As a business, it’s hard to use social media marketing for branding without seeming intrusive. Imagine those users interacting with friends in a physical social space – a bar, for instance – and having conversations constantly interrupted by a brand advocate hoping to push some new product on them. It’s not that it can’t be done (beer companies have found success having promoters handing out merch and beer tokens at bars, for example) but it’s an extremely delicate thing. Usually, people get fed up with the forced conversation, the insincerity, or both.

For this reason, it’s important to approach social media marketing from an inbound perspective. Inbound marketing, a concept pioneered by HubSpot founders Brian Halligan and Dharmesh Shah, means ditching interruptive, “sales-y” marketing strategies for more educational, inclusive ones. Social media is a great place for this. Demonstrating that you’re approaching social content creation with a desire to actually connect with your audience will make them more comfortable with you as a brand.

Recently, author Shea Serrano used this concept to springboard his new book, The Rap Yearbook (buy it now; it’s awesome and you’ll be taking part in social media marketing history), from its mild ambitions all the way to the New York Times Best Seller list. Serrano was a well-known blogger for the site Grantland, and had written one novelty, rap-themed coloring book previously, but nothing remotely close to the success he’s seen with his second book. Let’s take a look at some examples of how Shea’s Twitter account became his modus operandi for marketing success, establishing a unique point of view and drumming up a ridiculous grassroots movement to buy his book.

His Gratefulness for All the Support He Received and His Absurd Sense of Humor Became Rolled into One Hugely Important, Book-selling Personal Attribute.

i hope some dope stuff happens to you today

all the nice things everyone is saying about the book —-it’s for real overwhelming thank you love you oh great i’m crying again — Shea Serrano (@SheaSerrano) October 19, 2015

Simple tweets like this aren’t hard to come up with, but the message is important. As always, it sounds like someone who genuinely talks this way and (perhaps more importantly) is actually concerned with how our days are going. Tone is huge for brands, as well. A lot of brands are good at being clever – very few of them can inject sincerity into that cleverness.

One of the Coolest Things about Shea’s Story Is That He Brings a Genuine ‘outsider’ Perspective to the Worlds of Marketing and Writing in General.

it’s dope so many people are buying the book but it might be even more dope people are actually reading it cuz i mean who even reads anymore — Shea Serrano (@SheaSerrano) October 20, 2015

doggggggggg @pitchfork started a book club and they picked The Rap Year Book as their first book are you kidding me wow wow wow omgomg — Shea Serrano (@SheaSerrano) October 20, 2015

With most of the popular “new media” sports and pop culture blogs operating as a seemingly rotating cast of the same writers over and over again, it can be hard to find a unique voice. With Serrano, you get the sense that it was a world he never expected to be welcomed into. He reacts to his story being covered by publications like Pitchfork, Wired, and GQ with a really charming sense of surprise. In his interview with GQ earlier this year, he talks about how it’s still surreal to even consider himself a writer: “I needed another job. I tried going to Target and Walmart, different restaurants to be a waiter. But nobody would hire me because I already had a full-time job (Serrano only recently quit his “day job” as an elementary school teacher). I was just literally at home Googling “work from home jobs.” Writer was one of them … I said, well I guess I’m a writer now.” That’s really all you have to do: You just gotta say you’re a thing, and people will think you’re that thing.” Huh, who knew?

Shea Serrano didn’t come up with the idea of a giveaway. But – like many aspects of his social media success – there’s something endearing about the fact that it’s one man at the helm coming up with these promotional ideas, seemingly on a whim.

He’s not partnering with a major poster manufacturer (which – even if that wouldn’t have been feasible for him in the first place – his publishers could’ve likely pulled it off); he’s just giving away some posters that the book artist happened to leave with him. Or some “Yo! MTV Raps” playing cards that he happened to have lying on the passenger seat of his car. Throughout the lead up to the book’s release, he ran giveaways like these via his own Gmail account and told Wired last week, “I thought 15 people would do it, maybe 20 … It became like an accidental campaign.”

Shea Also Understands the Power of Collaboration in Marketing. 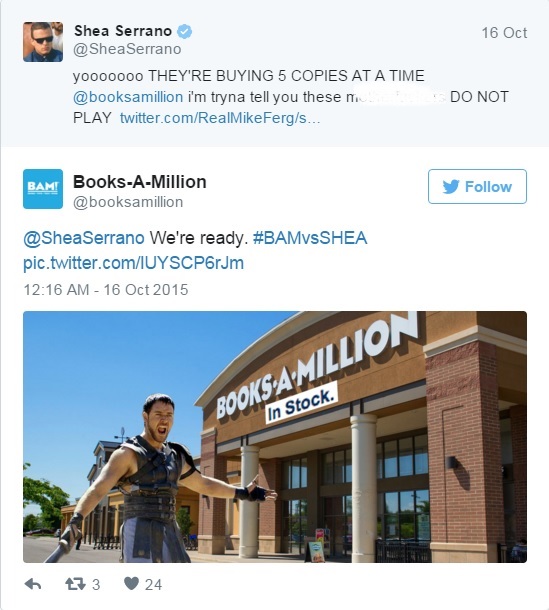 One of the most enjoyable aspects of his rapid rise to success was his playfully antagonistic back-and-forth with retailers (Amazon, Barnes & Noble, and Books-A-Million). Mostly, these exchanges would center on these sellers’ underestimation of his book’s potential. Playful jabs work really well for individuals and brands. We’ve seen it before with large corporations – when the audience understands that the whole thing is in the name of good-natured fun, they’ll respond really well. It’s something akin to being in on an inside joke.

He used these jokes as a way to create a very real and very effective “us against the world mentality” amongst his Twitter following. That part isn’t something that bigger brands can do, necessarily, but small businesses certainly can. When you’re willing to take a break from the self-seriousness people have come to expect from brands on social media, you’d be surprised at the support you can drum up. In the case of Serrano vs. his retailers, he won in a big way -selling out the stock on all three of their sites within the first month of the book’s release.

the book came out and didn’t flop pic.twitter.com/XvDYrq2KGV

Aside from that heartwarming, endearing stuff, he simply has a real talent for creating an engaging feed. Tweets like the one featured above aren’t just straight up funny (which they are) – they’re topical, self-effacing, and feel off-the-cuff. Small businesses from all kinds of different industries can take advantage of this kind of content creation – make memes, share GIFs, do it all. If you do it with any kind of a unique point of view, customers will be less opposed to you taking up space on their social platforms. As for Serrano, the more he’s made this all seem like a happy accident, the more success he’s been able to build.

And the Best Thing about Him?

Any questions about whether or not his “schtick” was genuine pretty much get laid to rest by stuff like this. He wants his success to inspire his followers to reach for the same.  He’s been known to respond to emails from fans with helpful advice about writing and publishing – he takes paying it forward seriously because it’s precisely what allowed him to become such a fast success story in the first place.