At the surface level, emojis are just a way to add emotion or personality to the less personal ways we communicate. If you’re like many consumers out there, you probably like to include an emoji or two in text messages or social media posts. After all, there’s an emoji to describe practically any emotion, product, or activity you can think of (even though we’re all still waiting for a taco to come with the iOS 9.1 update).

People send an average of 96 emojis or stickers per day, which adds up to 6 billion around the world. Marketers have taken note of their popularity and have found ways to incorporate them into their digital marketing strategies. Social media, email marketing, and mobile apps have all become commonplace for the use of emojis.

Case in point: take this story out of the UK that went viral. McDonald’s created a billboard to feature along a busy highway to promote its restaurants near London, and decided to share their marketing message solely with emojis. The sequence indicated a pattern of traffic and construction, two likely reasons for delays on the highway. It then shows a crying face due to the delays, followed McDonald’s famous arches and a smiley face.

Makes sense to me. We all hate traffic and construction, and enjoy getting our fast food fix when we’re in a pinch. However, the story doesn’t end there. A local graffiti artist took it upon themselves to add a puking face to represent how many of us feel once the joy of eating McDonald’s wears off.

So, the moral of the story is that fast food makes us sick, right? Well, yes, but the real point is that emojis are everywhere.

It’s also a common misconception that only the “younger” generations understand and use emojis to communicate. Chevrolet poked fun at this notion through a video series called “Emoji Academy,” where they used popular millennial celebrities Ashley Benson, Jamie Chung, and Zendaya to help make sense of the emoji craze to those less-experienced users, who are likely in Chevy’s target market. This series was a great way to bridge the gap between their vast audiences of potential buyers, while adding some personality to the brand.

Surprising? Think about communication trends such as acronyms like “LOL” and pre-emoji emoticons like “:)” – these elements have quickly become accepted as mainstream digital communication. When we communicate online, it’s often hard to “turn off” these tendencies when we share something on social media, write a blog, or send an email. And the same thing has happened with emojis.

Some of the earliest adoption of emojis at a more “corporate” level has been on Twitter, with automated emojis appearing alongside the use of specific hashtags. The #LoveWins hashtag included a rainbow, #MayThe4thBeWithYou featured a Star War’s theme emoji, and for each stop on the Pope’s U.S. tour, there were emojis to go with each location’s hashtag. They’re apparently popular enough to warrant a world holiday as well, with World Emoji Day on July 17th.

Other brands have shown their creative side through their emoji use, creating larger scale images through a specific pattern or series of emojis. Take this Bud Light tweet from the 4th of July, for example. They took their creativity to the next level by making the image into an animated GIF.

Domino’s has brought ecommerce and social media together through their Tweet to Order feature, where all you have to do is include “@Dominos” and a pizza emoji in your tweet, and you can place an order without ever leaving Twitter. As long as you have an account set up on Domino’s website for online ordering, you can tweet to order anytime.

Outside of Twitter, emoji usage is prevalent on visual-based networks such as Instagram and Snapchat. Nearly 50% of captions and comments on Instagram include at least one emoji, and individual Snaps or Stories on Snapchat often feature them in the caption. Snapchat took it to the next level by adding a separate emoji section so you can adjust the size and placement of the image in a Snap, without taking away valuable characters in the text box. Instagram has also enhanced the emoji experience, allowing users to use them as hashtags. Since they’re compatible with almost every web browser or smartphone out there, it’s a great way to include a little extra something in your marketing messages.

Emojis are even beginning to pop up in more “formal” digital communications, and many email marketing tools are stepping up to accommodate this trend. Email clients like MailChimp now allow users to include emojis in subject lines to help your message stand out from the dozens of others that fill up subscriber inboxes every day. Even Gmail has a feature to include emojis so that the everyday consumer can use them in their email communications.

However, it’s important to note that this is still a relatively new development and not every email client is compatible for emojis just yet, so you have to do a little digging to understand what tools and clients the majority of your subscribers use. If you find that most of your emails are opened on mobile devices, then regardless of the program, they will likely have no problem viewing them.

If your smartphone doesn’t have enough emojis for your needs, then you’re in luck! Several large retailers have launched their own downloadable emoji keyboards through the App Store and Google Play Store so consumers can include them in texts and social posts.

For all you interior design fanatics, IKEA Emoticons is IKEA’s emoji keyboard that features different types of products they sell, and even those fan-favorite Swedish meatballs you can snack on while you shop. Simply download the app and begin “improving communication at home,” which is IKEA’s self-proclaimed purpose for the tool.

As anyone with a Tim Hortons in their neighborhood knows, it’s not just a coffee shop; it’s a way of life (I know I’m not alone here). To show their Canadian pride, Tim Hortons summoned their loyal Twitter followers to suggest images to include in their Emoji keyboard by using the hashtag #TextLikeACanadian. The top 12 emojis were selected, including a moose, maple leaf, and of course, a Tim Hortons cup. Oh, and they launched the keyboard on Canada Day. Well played Tim Hortons, well played. 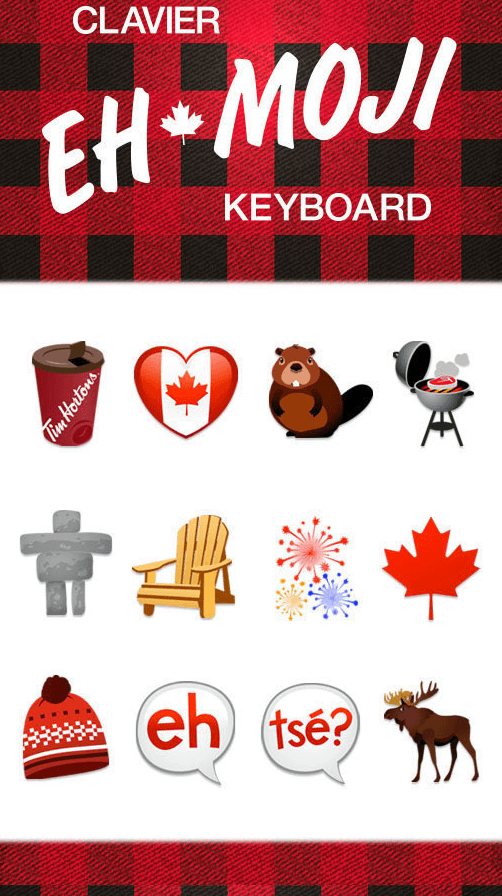 These are just two of many examples of B2C companies that have taken advantage of the emoji craze and used it as a way to build brand awareness. Giving consumers these customized images to share allows them to serve as advocates for your business as well as serve as a friendly reminder that you’re a business they enjoy and are loyal to.

There’s no question that emojis have transformed the way we communicate with one another, adding a personal element that reflects what would be conveyed in an in-person conversation. Like face-to-face interaction, emoticons and emojis impact our mood and facial expressions, causing us to mimic the emotion being conveyed. This reaction presents a strong case for using emojis in digital marketing campaigns because when used effectively, you can motivate consumers to check out your website, read a piece of content, or even make a purchase.

But before you start throwing around emojis of smiling cats or glasses of wine, make sure you understand your target audience to ensure that they will respond positively. An audience of older consumers or those less likely to have smartphones will either not know what emojis are in the first place, or wonder why you would bother with such a tactic. Generation Z, millennials, and parents of millennials, on the other hand, are a perfect fit for marketing with emojis.

In addition to understanding your audience, make sure that your company is a right fit as well. Companies with a lighthearted nature or those that emphasize being tech-savvy and modern can have a heyday with emojis. However, brands that tend to be viewed in a more serious manner, such as insurance or financial companies, should probably steer clear in order to maintain their reputation and credibility.

Once you’ve determined that your business and audience are a good fit for emojis, make sure you understand the meaning of those you’re about to use (consult this helpful dictionary if you’re unsure). This way, you’ll know that this is an “information desk help” person, even though I (and pretty much everyone else) strongly disagree. 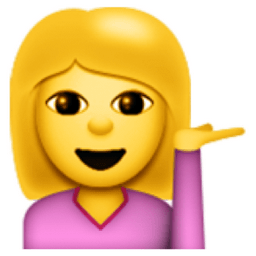 The influence of the emoji is undeniable, so get out there and put your emoji keyboards to work!