Last spring, Google announced that it would be altering its search algorithms to give a heavily increased advantage to sites that were mobile-friendly. While many in the industry saw this move coming, it was still a hugely important event in the history of SEO – and its impact is still being felt today.

Now we may be on the verge of yet another significant change to the fabric of search engine optimization. Voice search, while not a major overhaul like mobile was, is starting to significantly alter the SEO landscape. 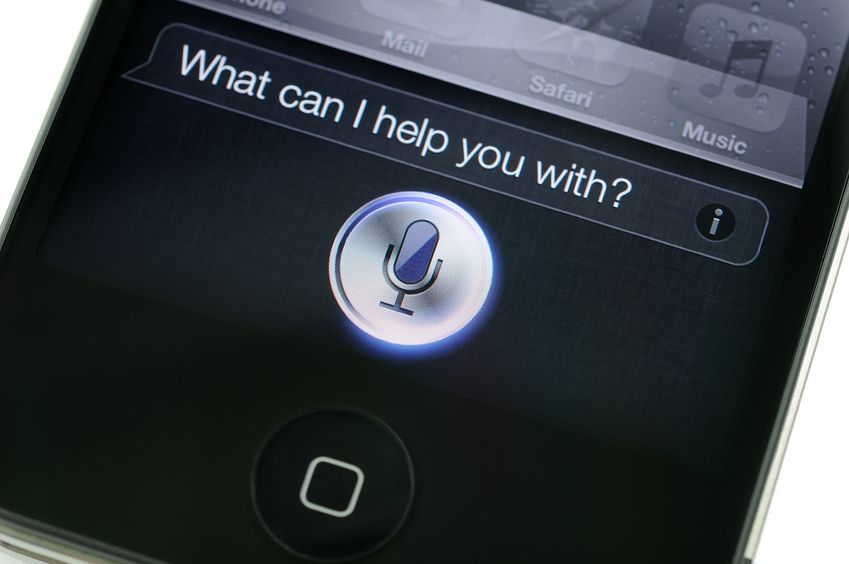 Appropriately enough, voice search has been largely facilitated by the mobile takeover. Virtually all smartphones have technology capable of “hearing” and interpreting the spoken word. That technology’s steady improvement has coincided with an increasing need for information from our phones when we’re in situations that aren’t particularly typing-friendly. As Google has placed increased importance on what they consider micro-moment search results – pages that rapidly deliver exactly what a user needs in order to do, make, find, or buy something – the context and wording of a search becomes just as important as the topic itself.

With voice search, context and wording will be altered dramatically.

Voice search technology will lead to a surge in rankings for content that answers questions in the actual wording that they’re asked. These will include slightly longer-tail keywords like, “What’s the fastest way to get to,” “Where’s the best place to buy,” and the like.  In the past, Google would snip the keywords and phrases from a search to bring relevant results in the most efficient manner possible. But, as with most things in life, brutal efficiency can lead to some cracks and imprecisions.

Also, Google enables their algorithm to sort out when someone is looking only for information for educational purposes, and when it is meant to facilitate an immediate action. Voice searches will enable the engine to do this more effectively, with conversational search wordings providing a clear glimpse into the user’s context and intent.

Another difference between typed and voice search is that voice searching doesn’t lend itself to any kind of search engine results page (SERP). Since the answer will be provided orally, there’s no way for a long list of results to be given other than simply reciting them chronologically. While this is technically a viable option, it doesn’t quite reflect the smooth, seamless interactions one thinks about in relation to the future of digital personal assistants.

The idea of conversing out loud with a digital personal assistant has been a part of our culture for some time now. Perhaps the most famous – and ominous – example would be the character of HAL 9000 from the book and film 2001: A Space Odyssey.

These days, that same idea has entered the mainstream in a big way. Major tech companies like Google, Amazon, and Microsoft have all devoted huge amounts of time and resources to developing and marketing these tools.

These gadgets will be the physical domains in which voice search will live and grow. As they become smarter and more technologically advanced, our voice commands will integrate smoothly between actions that require search engines and those that simply require offline action from the assistant itself.

Eventually, our digital personal assistants will become not just more skilled listeners, but also develop predictive capabilities. In other words, the devices that we are already starting to orally dictate actions to will soon know in advance what information we need from them. This could revolutionize the way we accomplish tasks, both at home and on-the-go.

And these improvements are already starting to happen: 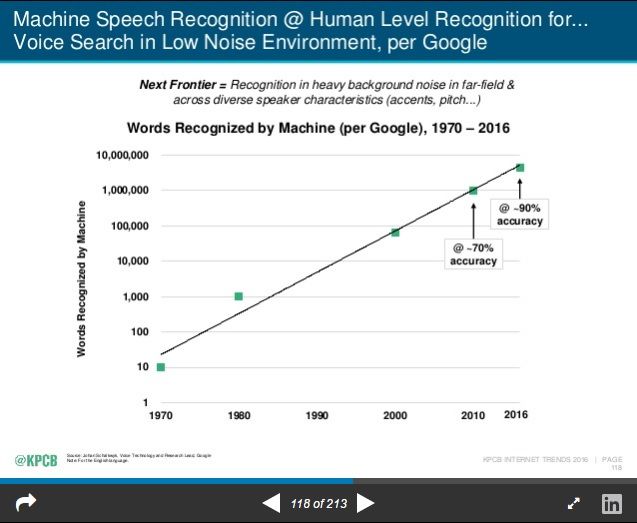 The graph above, from Mary Meeker’s 2016 internet trends report, shows that devices tested by Google are steadily approaching human-level recognition for voiced searches. While it is worth noting that the graph only represents searches dictated in a “low noise environment,” the results are still telling － topping out at around 90% accuracy and only expected to improve in the future.

The rise of voice search isn’t limited to mobile usage. In June, Apple rolled out its new desktop operating system, Sierra. One of the most highly touted new developments in Sierra is the improved functioning of Siri on desktop. David Pierce wrote about his initial experiences with the new and improved Siri for WIRED:

Siri for Mac can handle multi-step searches, for instance, like ‘What time do the Warriors play?’ followed by ‘What channel is it on?’ … You can look up sports scores, send tweets, or – this is my favorite feature – use Siri to tweak system settings without diving into the hilariously impenetrable System Preferences menu.

These features build a more natural experience between the user and his/her digital personal assistant. As more and more kinks get ironed out, those assistants will feel increasingly human and be able to anticipate our daily needs.

For businesses hoping to rank higher in search engines, it will be vital to use keywords in a way that shows your content provides quick answers and solutions to those micro-moment-style search requests, lest you find your content banished to the bottom of results pages. Specifics on how to accomplish that will be hard to pin down until more time has passed and the Sierra OS is out of beta, but the most important foundational step to take is to incorporate intent.

If your business sells, but doesn’t repair, electronic equipment, you need to incorporate that into your SEO strategies. Since users on voice search will be more specific about the action associated with the product, find ways to organically incorporate those verbs into your content and keyword lists: “buy,” “sell,” “retail,” etc.

Thus far, we’ve focused primarily on Apple’s Siri-enabled products, but their competitors in the digital assistant market are worth discussing, as well. In fact, as Apple approaches its first decline in iPhone sales since the smartphone hit the market, opportunities appear to be growing.

The most prominent is Amazon’s Echo assistant. The Echo is entering the market at an optimal time, with its voice-only functionality actually serving as a positive branding element, rather than a functional restriction.

Amazon CEO Jeff Bezos confirmed as much while speaking at Recode’s Code Conference last month, promising that the company is currently devoting more than 1,000 employees to the Alexa/Echo (the former being the name of the actual assistant, the latter the device in which “she” lives) line of voice-based assistant products.

He also seemed well aware of how contentious the race to voice search supremacy could become amongst his company, Google, and Apple: “There will be huge advances. Bigger companies like Amazon have an advantage because you need a lot of data to do extraordinary things.”

Here, he is referring to the vast troves of search data that Amazon has been compiling since it started as a company. In fact, it’s become clear in recent years that Amazon is not far off from Google in terms of its prevalence as a starting point for users looking for something on the internet.

Voice search functionality will continue to change the way we search the web and interact with our devices. As businesses hoping to get found on the other end of those search requests, it’s vital to adapt your SEO strategies and account for the different context and word constructions that voice text represents.

As for which tech giants will come out on top in the battle for voice search/digital personal assistant supremacy, it’s still far too early to tell. Both Google and Amazon have immense banks of search data to help shape strategies, and Apple has Siri － still the digital assistant with the strongest brand. It will be interesting to see which strategies pan out and how our daily lives will be affected.