Super Bowl Sunday is the pinnacle for advertisers, an evening for which brands showcase their much-anticipated spots with the high hopes of captivating the hundreds of millions watching across the globe.

The ads, which cost upward of $4 million per 30-second time slot, occupied the talks of Monday Morning Quarterbacks and the casual fan alike just 24 hours following Baltimore’s win over the San Francisco 49ers in Super Bowl XLVII. Brands such as Tide (“Miracle Stain”), Taco Bell (“Live Mas”) and Budweiser (“Brotherhood”) took home the coveted top honors judging by most mainstream reviews, while others including Pepsi (“Party”) and RIM/Blackberry didn’t fare as well.

But as Twitter reached its fever pitch (231,500 tweets per minute, to be exact), during the third-quarter power outage inside the Mercedes-Benz Superdome in New Orleans, a few ingenious brands separated themselves from the pack, some even generating buzz without spending a dime (ah, social media).

Unlike some of the brands that “newsjacked” the power outage during the Super Bowl, America’s favorite cookie, Oreo, had little to no correlation with what was happening. That, though, is what makes the following tweet so impressive. 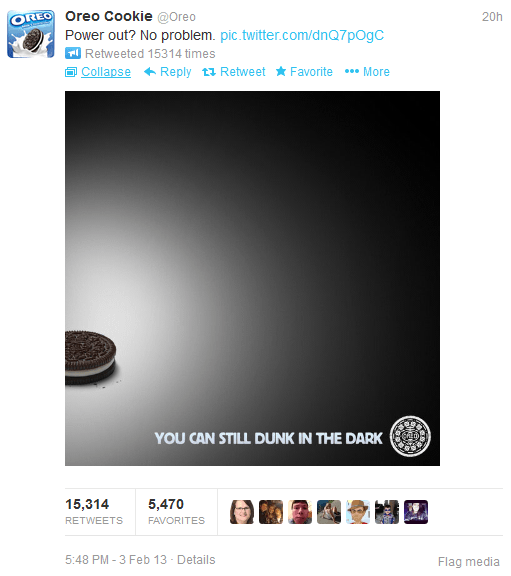 In mere minutes following the outage, Oreo posted the above-pictured gem on both its Facebook page and Twitter timeline. The tweet, (Power out? No problem. You can still dunk in the dark.) was an instant winner, boasting more than 15,300 retweets by Monday morning. On Facebook, it received more than 21,000 likes, 815 comments and nearly 7,000 shares, “for free! What’s more, Oreo cashed in on a Super Bowl seven-week Instagram contest, adding roughly 34,000 followers in that span.

This is a prime representation of the power of social media and instant advertising in today’s digitized world.

Buffalo Wild Wings was among one of the first to admit (jokingly, at least we think) to being the source of the Super Bowl blackout. The restaurant chain tweeted: “We really just don’t want football season to end. Can you blame us?”

The tweet, and the blackout, for that matter, fit perfectly into the brand’s advertising of previous years, where its frequent commercials would illustrate a fictitious scenario where fans often played a role in sending the game to overtime. In this case, if Buffalo Wild Wings failed to act, it would have been a clear miss for the brand. Kudos to the BWW, though, for thinking quick and capitalizing on free publicity. The tweet garnered nearly 10,000 retweets from fans and followers.

Auto manufacturer Audi has a history of throwing a quick jab at its competitors whenever it sees the perfect opportunity. A brand like that must have thick skin to dish it out the way it has in the past. When the lights went out in New Orleans, in the Mercedes-Benz sponsored Superdome no less, Audi seized the occasion by not only zinging its rival, but promoting its signature LED lights as well.

Obviously, Mercedes had nothing to do with the outage. But the mere link between the brand and the stadium gave Audi an easy break to fire the tweet above, which also picked up close to 10,000 retweets.

For brands that air ads on Super Bowl Sunday, the concern is whether or not, at the end of the day, the overall sentiment will be positive or negative. Tide ran away with the win in that department, capturing 86 percent positive sentiment on Twitter. Mashable posted this infographic, which breaks down brands of the Super Bowl on Twitter. 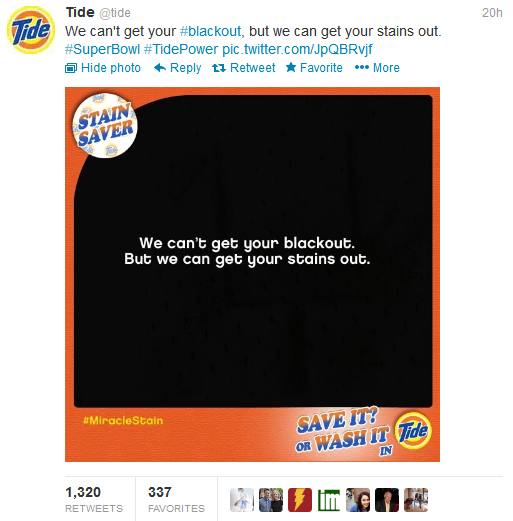 Like Oreo, Tide used an image to get its message across: “We can’t get your #blackout, but we can get your stains out.” The tweet received only 1,300 retweets, but it was clever nonetheless. It certainly provided the fans with more fodder to mention the brand via social media after airing one of the night’s most popular commercials.

Drug store chain Walgreens isn’t the first brand that comes to mind when it comes to interaction on Twitter, much like Tide. But surprisingly, the brand has more than 100,000 followers on the social media platform. On Sunday, the brand was sure to get in on the action by sending the following tweets during the blackout. 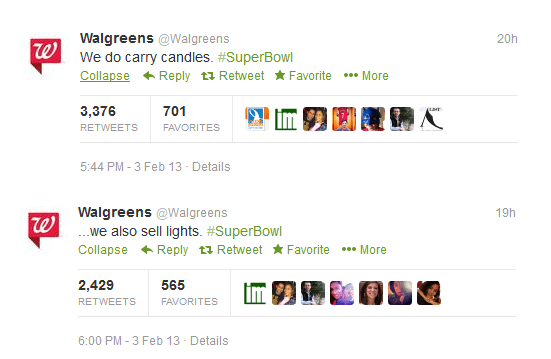 It’s not necessarily ground-breaking material, but the content came off as particularly witty and humorous considering the barrage of brands that have newsjacked current events by promoting a product or sale in the past.

Instantaneous Advertising Can Pay Off

While traditional means of advertising paid off for most brands, the fluke power outage allowed brands to get on the most prominent topic of discussion early in the third quarter of The Big Game.

“This is a huge change,” Kellogg School of management marketing professor Tim Calkins told Forbes. “It used to be you created a Super Bowl ad and you were done. Now what’s happening is marketers are generating content and interacting with people all throughout the game.”

For the majority of the 34-minute stoppage, people took to Twitter to insert their favorite blackout jokes and puns, and retweet any witty responses as well. This gave brands and marketers a sufficient opportunity to pounce on the situation. Calkins added that measuring the return on investment of these newsjacking efforts isn’t easy, but if done quickly and efficiently, it will certainly amplify “the effect of your spending.”

Aside from the commercials, which brand stood out the most to you on Super Bowl Sunday?

This is the first time I have seen the Buffalo Wild Wings example. Thank you for compiling this list and catching an awesome tweet!

@pshapiro Thanks for reading, Paul. Glad you enjoyed it! It was definitely one of my favorites considering BWW’s past ads. Perfect.