Social media platforms have become a fundamental part of our daily lives and routines. We look to them for connection, entertainment, and news about the world around us. For the companies who build these platforms, our dependence is their financial gain. Not only does our constant use help drive revenues (primarily through advertising), but the onus isn’t even on them to create the content – we do that for them!

But the fact that companies like Facebook enjoy the benefits of a user-generated content stream doesn’t exempt them from curatorial responsibilities. In order to keep us coming back for more, social networks have to create a user experience (UX) that presents content in a way that’s easy and enjoyable to digest. If they’re good at this, they’ll incentivize longer usage rates and make more money.

In order to do this, many have started to shift away from a chronological feed – where content is ordered simply and statically based on the time it is posted – to an algorithmic one – in which posts are ordered based on relevancy.

On the one hand, this stands to reason. If my Facebook timeline is an ever-changing stream of new, increasingly relevant posts, I’ll spend more time on it than if it is merely an unchanging list. One can spend hours traveling down the wormhole, constantly refreshing and being treated to shiny new morsels of content.

But there’s another, possibly darker side to social media algorithms. Isn’t “relevancy” a bit subjective? Once the door is opened on a subjective social media experience, a bevy of new questions and challenges are introduced. Does a “like” actually mean I like something? Not always. Do I need to be shown something immediately just because a few high school acquaintances are engaging with it? Please god no. For executives and engineers at the big social platforms, their job becomes toeing that precarious line – between the dullness of chronology and the murky subjectivity of “relevancy.”

Let’s take a look at the three most noteworthy instances of platforms making the switch – Facebook, Instagram, and Twitter – and how the move went over with their respective audiences.

Facebook Did It First: What the News Feed Meant for Social Media 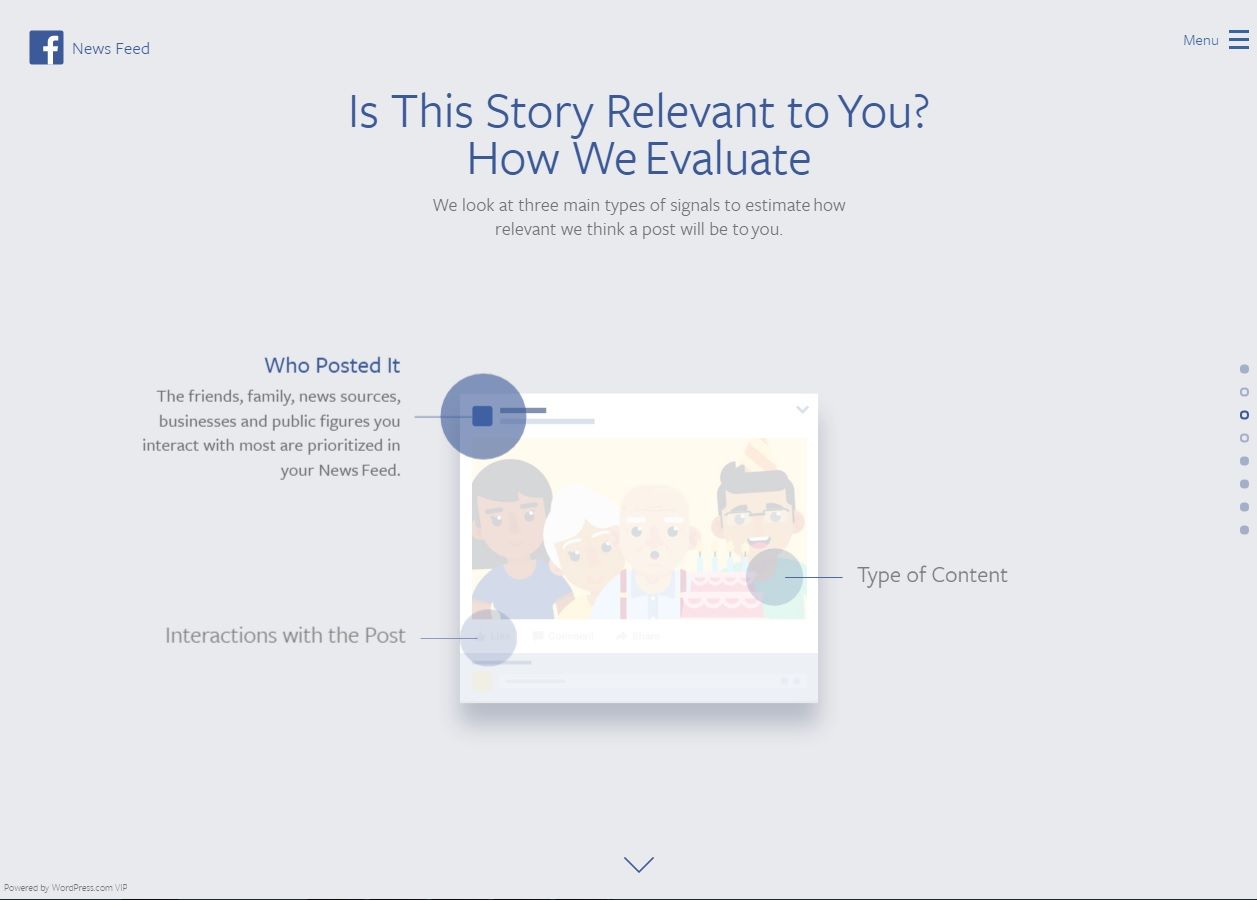 Before Facebook could make the shift to an algorithm, they had to invent the News Feed in the first place. Up until 2006, Facebook was merely a network of personal profiles. To find out what your friends on the network were up to, you had to manually go to each profile. Chris Cox, Chief Product Officer at Facebook, was there: “The Internet [at that time] could help you answer a million questions, but not the most important one, the one you wake up with every day: How are the people doing that I care about?”

But the News Feed actually didn’t start out chronologically. It began as a stream of posts ordered by the speculative hunches of a group of Facebook’s engineers. They tried a mish-mash approach of ascribing relevancy to posts that seemed to make the most sense: photos as opposed to news stories, for example. Eventually, this gave way to their first formal algorithm, EdgeRank. But EdgeRank was still based on many of the broad, somewhat unscientific assumptions of the engineers. In 2013, it gave way to a far more complex algorithmic News Feed system, one that was using at least 100,000 individual weight factors.

As for user reaction, things quickly got pretty inflammatory. Users were not only mad about what they saw as unnecessary shifts in the Facebook ecosystem, but the fact that they were implemented without much notice or explanation. In 2006, Mark Zuckerberg was forced to pen two apologetic blog posts in two days – one condescending and ineffective, one more conciliatory and understanding – in an attempt to stem the overwhelming tide of vitriol. Eventually, though, users got used to the News Feed, accepting it for what it was and largely forgiving Zuckerberg for the not-so-transparent way in which it was rolled out.

Facebook wants to be more than just your social network – it wants to be your window into the entire digital world. The News Feed’s eventual adoption of social media algorithms plays such a huge role in that because – despite the initial pushback from the user base – it’s precisely what drives our compulsive and astonishingly consistent usage of the platform.

In March, Instagram announced that it would be switching from the chronological stream to an algorithmic one, designed to show users “the moments we believe [they] will care about the most.”

Considering the platform is owned by Facebook, this shouldn’t come as too much of a surprise. It’s a clear indication that Facebook sees chronological streams as not merely wrong for its platform specifically, but as a generally outdated format. Along the same line of thinking, Instagram had already added an Explore tab to its platform, designed and curated to give users ideas about new accounts to follow through a display of non-chronological posts.

The outrage over Instagram’s algorithm plans was predictably swift and intense. A considerable portion of its user base – largely brands and professional artists – spent the days following the announcement posting a seemingly endless stream of “Turn notifications on” posts. The goal was to convince followers to turn on notifications specifically for their accounts, lessening the debilitating effects that an algorithm-based stream would have on their reach.

If you love my work, stay with me

It also inspired a similarly enraged group of users to start a petition on Change.org (see image above). It currently has over 335,000 signatures.

In response, Instagram came out with statements that walked back some of what the original announcement implied. In a statement to TechCrunch, the company tried to reassure its riled-up users:

“Performance or popularity is not what we’re optimizing for. While we are using likes and comments as signals, timeliness and the relationship between the poster and the viewer are also important … Our goal is to help people see the posts they care about, including from brands.”

Now that the algorithm is here, it will be interesting to see whether the user reaction stays vocally defiant or gradually fades into acquiescence, as was the case with Facebook.

For Twitter, the chronological stream has been one of its defining characteristics because of its importance to real-time conversation. If tweets are ordered based on a complex algorithm, their role in the context of a larger conversation could easily be lost.

That’s why in February it was somewhat surprising to hear reports from BuzzFeed that indicated an algorithmic overhaul was forthcoming. As word spread, the hashtag #RIPTwitter became a trending topic on the platform itself.

Side Note: Some transparency props should be awarded to Twitter for allowing the hashtag portending its death to exist organically on the front page of its own platform.

As it turned out, the calamitous reaction was largely overblown. Following a tweet from CEO Jack Dorsey, the actual rollout came and went with very little fanfare.

This was a simple example of Twitter actually doing something right. The rollout ended up being a natural extension of the “While you were away” feature that shows users a few algorithm-approved tweets at the tops of their feeds. After those few, the stream progresses in the reverse chronological order that users have come to know and love.

As for the rest of the goings-on at Twitter, things are looking pretty bleak. User growth has stagnated, Moments has been underwhelming, and Jack Dorsey’s second stint as CEO is already starting to get the kind of “in over his head” press that characterized his previous tenure’s demise.

So, at least in this one area, Dorsey can hang his hat on a job well done.

One of the reasons Instagram gave for switching to an algorithm was their finding that, with a chronological feed, users typically only see 30% of the content available to them, with the other 70% forever gone to the vast ether known as FOMO. It’s an effective framing device, making a strong case for the comparative merits of algorithmically organized content.

The opposite perspective is also interesting, though. Who says social media has to be consumed at a 100% rate of retention? If you are attending a party, you don’t base your enjoyment on whether you were privy to every conversation that was had. You base it on whether you enjoyed the conversations that you did have. The best way to ensure that is to maintain total control over them.

So, do social media algorithms lead to more or less control? The folks at Facebook, Instagram, and (to a lesser extent, so far) Twitter would certainly side with the former. They cite the fact that your behavior and engagement history will dictate what photos and posts you’ll see in the future. If you interact with posts of a certain ilk and from certain other users, you can expect to see more of them.

But since there will always be an element of the unknown to algorithms, users will eye it with suspicion. Fortunately for those platforms, that suspicion has thus far tended to be vocal, but short-lived.